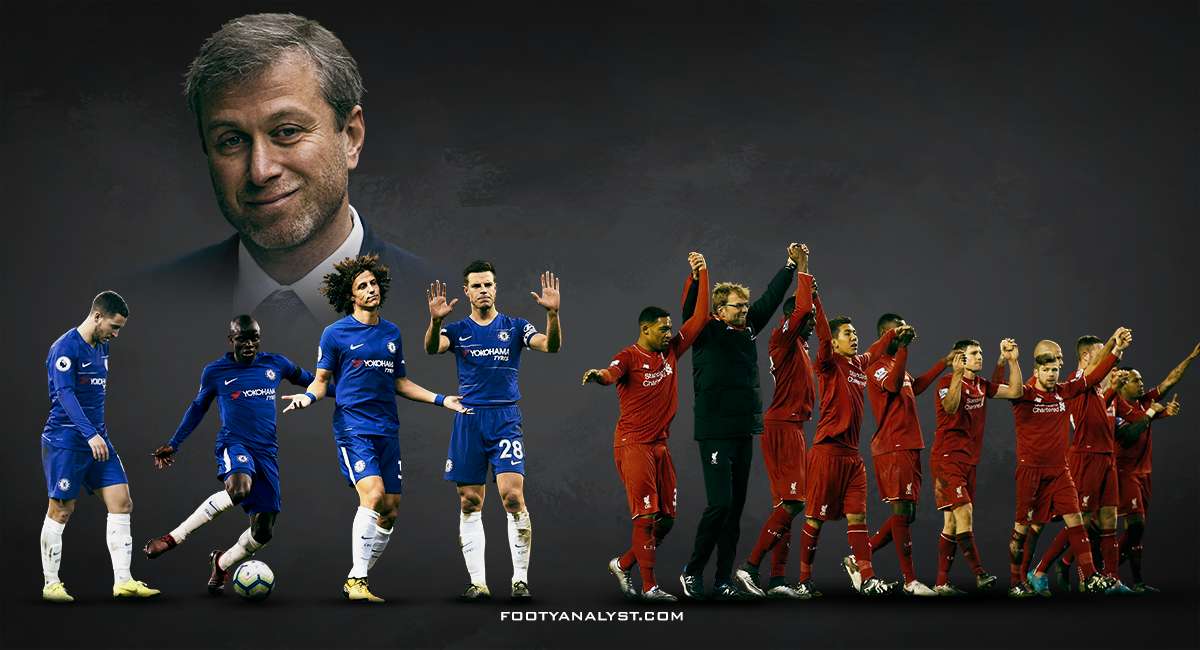 Chelsea’s emergence as a big player saw a rivalry of sorts kindle with Liverpool throughout the mid-2000s. Liverpool got the better of them in a few memorable individual encounters, but to Chelsea fans it was evident they had won the war: they have a trophy cabinet to evidence this, featuring five league titles since 2003. However, hidden beneath the animosity that fans of the London club were eager to generate, there was a subconscious desire for acceptance – they exhibited the insecurities of new money, a plea for acceptance buried within the brashness of their challenges. The case can be made that these insecurities are ultimately proving well-placed: they conquered all before them, but in their haste did not build steady foundations.

Cast in the role of a footballing Cromwell, Chelsea succeeded in usurping Liverpool for a while, but as the sleeping giant awakes from its slumber, there is turmoil at Stamford Bridge. An identity crisis that has been brewing for some time feels like it is coming to a head: another manager is on the brink, a transfer ban is incoming and the owner is struggling with visa issues and must surely be contemplating pulling the plug. Crucially, there is no obvious way out.

Liverpool’s wilderness years were characterised by a vision on the horizon, at times little more than a mirage, of ‘the Liverpool Way’ to which they must return. Similarly, even as Moyes, Van Gaal and Mourinho spectacularly failed to emulate Ferguson at Old Trafford, the blueprint instilled by the great man remained ingrained within the fabric of the club. Solskjaer is proving that it only needs to be tapped into to return to success. The ability to throw lots of money at problems was never an identity, and with the money possibly drying up at some point and opponents getting richer, this leaves Chelsea with a serious problem.

It is May 2005. Anfield has just witnessed a stark illustration of how football can be decided on the finest of margins: Luis Garcia’s goal has been adjudged to have crossed the line, and Chelsea will not be going to Istanbul to compete for their first European Cup. The away fans are not interested in hearing that the alternative would surely have been a penalty and a red card for Petr Cech – to their minds, they have been cheated of a place in a Champions League final. This will not be forgotten. Liverpool, meanwhile, has lit a fire which will go on to carry them to a historic fifth European Cup in what will come to be remembered as the greatest final of all time: footballing heritage, for now, has prevailed by millimetres.

Flash forward four years. It is the Chelsea players who parade the pitch, arms aloft, having just come out on the right side of a crazy 7-5 aggregate tie. This is the second consecutive year they have dumped Liverpool out of the Champions League, the very competition to which Liverpool have a unique claim amongst English clubs. There is a feeling that Liverpool’s pedigree counts for nothing now – spirit and heart is no match for Abramovich’s super-team. The triumph is not confined to Europe: the picture is even more stark domestically, where Chelsea have won the league twice since Garcia sank them at Anfield. Liverpool, without a title since 1990, have a whole generation of fans who can only fantasise about such silverware.

The London club celebrate with the aura of a side who have just overcome a bitter foe, finally expunging the pain of the ghost goal. Liverpool consider themselves above such a rivalry: their war is with Manchester United, and it is a clash of dynasties. The reality tells a different picture, however – it is the new money in the ascendency, and all the disdain in the world will not keep Liverpool from being ousted.

Even as Chelsea celebrate, however, there is a sense that something is not quite right. In each of these three clashes with Liverpool, a different manager has presided over The Blues. While Rafa Benitez has remained a constant in the opposite dugout, Abramovich has discarded coaches as easily as spare change in his relentless pursuit of success. Benitez himself would eventually be sucked through this revolving door, replacing Roberto Di Matteo. The Italian, appointed as caretaker manager after yet another sacking, was the man to eventually deliver the Champions League to Stamford Bridge, but found himself dismissed less than eight months after taking the reins.

This was the culture during Chelsea’s golden years: instant success or change. The scattergun approach was mirrored in player recruitment – a problem area would be identified, and money would be poured into it. The wastage was enormous, but it hardly mattered; Shevchenko and Zhirkov were big-ticket flops, but gambles on the likes of Drogba, Essien and Cole provided the basis of a team that would define an era. The capture of Fernando Torres, Liverpool’s ultimate humiliation, proved to be a terrible piece of business, but this was almost irrelevant. Chelsea had climbed to the top on a pile of cash, and they resolved to entrench their position with more of it.

Since Abramovich’s takeover in 2003, money has poured into the Premier League almost unchecked. The limitless resources at Manchester City’s disposal now dwarf the financial muscle of Chelsea’s backer, who also happens to be in the midst of a visa dispute which means he cannot reside in the country. Even the sides operating outside of the hyper-club model have more funds than ever before. TV revenues mean that lots of the top clubs have the kind of money to, at the very least, ensure Chelsea cannot bully them in the transfer window. What remains is a club with no direction.

As they stood unwittingly at the cliff edge, exercising their fiscal dominance for one of the last times by prizing Torres from Anfield, their self-proclaimed rivals were approaching rock bottom. Hicks and Gillet were running the club to the ground, Roy Hodgson had declared Liverpool to be in a relegation battle shortly before being replaced at the helm and Torres was just one element of a wider mass exodus. Through all of this, though, the identity of the club was never in doubt. Everyone knew what Liverpool should be, it was simply a case of restoring it.

Indeed, Hodgson’s short-term successor was none other than club icon Kenny Dalglish. Few men can claim to understand Liverpool more deeply than him, and sure enough he ended the season by delivering the team’s first piece of silverware since 2006. This was by no means an instant fix, and the club have since set about a much longer-term process of truly returning Liverpool to Europe’s top table, but the point is that there has always been something to pursue: a Liverpool Way.

This is not a phenomenon confined to Anfield. Perhaps the most obvious example is Barcelona. The seats at the Camp Nou proudly declare that it is “mes que un club”, and this is borne out by the ethos uniquely associated with the Catalan side. The philosophy of Johan Cruyff is ingrained from La Masia upwards which acts as a guiding light in dark times, and even as they dominate in the league there are those who call for Valverde’s head for straying from these principles to some extent. Even though Manchester City had to initially spend heavily, Pep Guardiola has managed to instil a similar mentality at Manchester City – an imported identity, but one that nonetheless provides some kind of safeguard against the fickleness of fortunes.

Another highly current illustration can be seen across the city at Old Trafford. Much like Dalglish, it is not obvious that Ole Gunnar Solskjaer will have the answers for the long-term, but he knows what Manchester United means and by virtue of this alone has been able to begin the club’s road to recovery. The Red Devils never strayed as far from the path as Liverpool had done, and the rebuilding job has been correspondingly less of a mammoth task, but the key is that both clubs have plans from which to build.

Chelsea find themselves without any plan. The team is a museum of their lavish spending, and is consequently still packed with talent. Eden Hazard and N’Golo Kante spring to mind instantly, but the whole squad is of a respectable quality. However, there is no shared vision which they are all pursuing. Each probably has their own ideas about the best ways of playing, and there is little point bowing to the opinion of the manager when it is common knowledge that as soon as fortunes change then a new man with new ideas will take the helm. Never has there been quite such a vivid depiction of this endemic issue as Kepa standing his ground on the Wembley turf in a cup final, and refusing to be substituted by Maurizio Sarri.

The manager has not even completed a full season at the club, but has already been driven to storm towards the exit in extra time of the League Cup final. His decision to turn around has extended his stay of execution, but it certainly does not feel as if this will blossom into a long and happy relationship. Conte and even Mourinho were hounded from Stamford Bridge in much the same way – the difference now is that Chelsea cannot paper the ever-expanding cracks with bank notes. Save for the oil giants that exist on their own plain, clubs can now only really hope to achieve success by out-thinking and out-planning everyone else. Chelsea have done precious little of either.

Ironically, Sarri represented an opportunity to instil something that could eventually become known as the Chelsea Way. It came with the ready-made label of Sarri-ball, but six months down the line the terraces are voicing their disapproval of it. At this point, nothing short of a premeditated and determined effort to change the culture can save Chelsea. If they act now to lay foundations made of more than just money, they will reap the rewards in years to come. If not, they will float away from the elite, their wealth no longer enough to anchor them, and time will forget that they once rivalled Liverpool.

Once Upon a Time in Dundee
Gracias Pipita: A farewell to Gonzalo Higuain
To Top