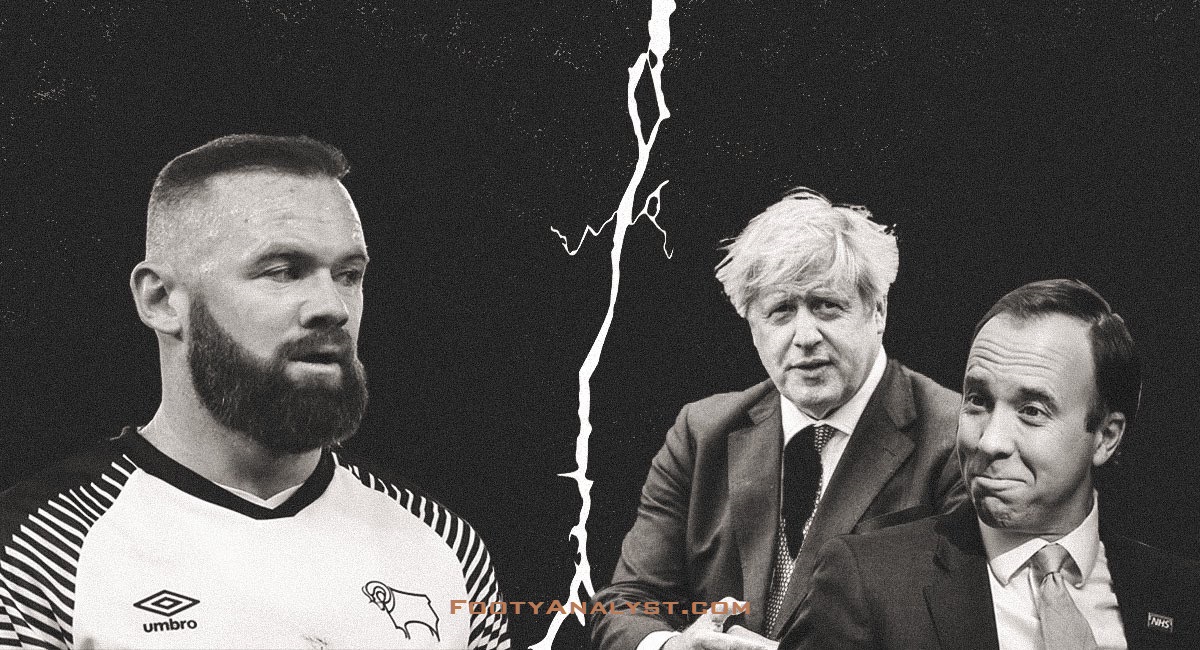 Fans never thought that they’d see the day when Wayne Rooney, dressed in a tasteful black turtleneck, would be bashing Matt Hancock in the Sunday Times. The government’s main tactic throughout this pandemic seems to be shirking responsibility and shifting the blame. So, after trying to divert attention to the EU, the WHO and their own scientists went poorly, Premier League footballers were, naturally, next on the Health Minister’s list.

The call for them to “make a contribution, take a pay cut and play their part” predictably didn’t sit well with Rooney and his peers, many of whom took to the media, accusing Hancock of waving his populist flag a bit too fervently, using them as a scapegoat. All this raises some interesting questions. Why was Matt Hancock so ready to throw these people under the bus? Why should Premier League footballers be the ones to shoulder this burden?

I agree with those that say footballers are paid too much. It’s a debate heard in every pub up and down the nation. According to Boris Johnson, we should be clapping for bankers and hedge fund billionaires but footballers are singled out as needing to do more. It was recently revealed that Amazon founder, Jeff Bezos, is set to become the world’s first Trillionaire, that’s 1 followed by 12 zeros. To put that amount of money into context, scientists have estimated ending climate change would cost roughly $300 billion. Footballers are NOT in the same bracket, not even in the same hemisphere, yet their profile and platform have put them right in Hancock’s firing line.

This kind of populist politics is nothing new for the Tories. Photo-ops with poorly pulled pints of a horrible looking bitter are common. It is odd, however, for them to mention football so brazenly. They’ve always had an interesting relationship with football, from fairly innocuous incidents like David Cameron not being able to remember if he supports Aston Villa or West Ham, to one of the greatest scandals in our country’s history, Hillsborough. The game has always been held in contempt for some reason, and there has been a hint of resentment at the opportunity it affords working class and Black, Asian and Minority Ethnic (BAME) people.

The world is changing, yet the arrogance of those at the top is blinding. Two thirds of Johnson’s cabinet went to public school, flawed institutions that feed into their delusions of grandeur. These people are not representative of a modern Britain, football is. It is clear that the thought of BAME people rising through the ranks of any industry repulses this government. The Prime Minister is a man who has no qualms when it comes to comparing women in burqas to ‘letterboxes’ or making jokes about ‘watermelon smiles’.

Football is different. Football is one of the world’s last true meritocracies, a business in which the very best rise to the top, regardless of their race or class. Of course, people with a propaganda would not want to understand it. There is an argument that football is inherently socialist. Although originally the pastime of Old Etonians, their grip on the game was brief. Leon Trotsky, admittedly a divisive figure, stated in is 1925 book Where is Britain Going, “The revolution will, inevitably, awaken in the British working class, through artificial channels like football.” I doubt Trotsky foresaw football becoming a multi-billion pound industry but the point remains.

The British media have a hold over the working class like no other nation. Brian Clough, one of the greatest managers this country has seen, once said, “If I wanted to improve the standard of life in this country over night and somebody gave me a magic wand at Christmas, I would have them [Rupert Murdoch and Robert Maxwell] removed from this planet.” Portrayal of football and footballers since then has barely changed. Take Raheem Sterling, for example. His talent on the pitch is indisputable, he’s helped carry Manchester City to multiple Premier League titles since joining as well as helping England to their first World Cup semi-final since Gazza cried in 1990, so why is he such a target?

Racist rhetoric is a staple for newspapers like The Daily Mail and The Sun. Simple things like the wording of a headline have a huge influence. After Euro 2016 the story of Sterling buying his mother a house broke out. A completely inane article was made inflammatory by its headline which read, “£180,000-a-week England flop Raheem Sterling shows off blinging house he bought his mum”. The phrasing here is already racist but when you compare it to a piece written about Phil Foden doing the exact same thing you can’t hope but feel the roots run deeper. That particular headline read, “Starlet Phil Foden buys new £2m house for his mum”. The difference is starkly visible.

In the end, the Tories’ misunderstanding of football doesn’t just come from a misguided sense of superiority, but from jealousy. Not because of their ability on the pitch but because of the adoration footballers get. Johnson and Hancock, more than most, crave it. For young men and women who are taught to be the leaders of tomorrow, they do seem to be awfully fragile. Johnson in particular is a man who likes to model himself on Churchill yet is seemingly out of his depth and willing to change his mind once any kind of pressure is exerted. Perhaps a more apt comparison would be Unai Emery.

The fact of the matter is, footballers are making a significant contribution. Marcus Rashford recently used his platform to ensure millions of starving children will be fed in defiance of the government’s plan to scrap the free school meal scheme. In hard time, footballers have often stepped up to extend their support more than politicians and billionaires. It would appear that the government has scored quite the own goal.

The best Champions League second leg comebacks of the last decade
Loan Strategies: How some clubs are aiming to win at player development
To Top