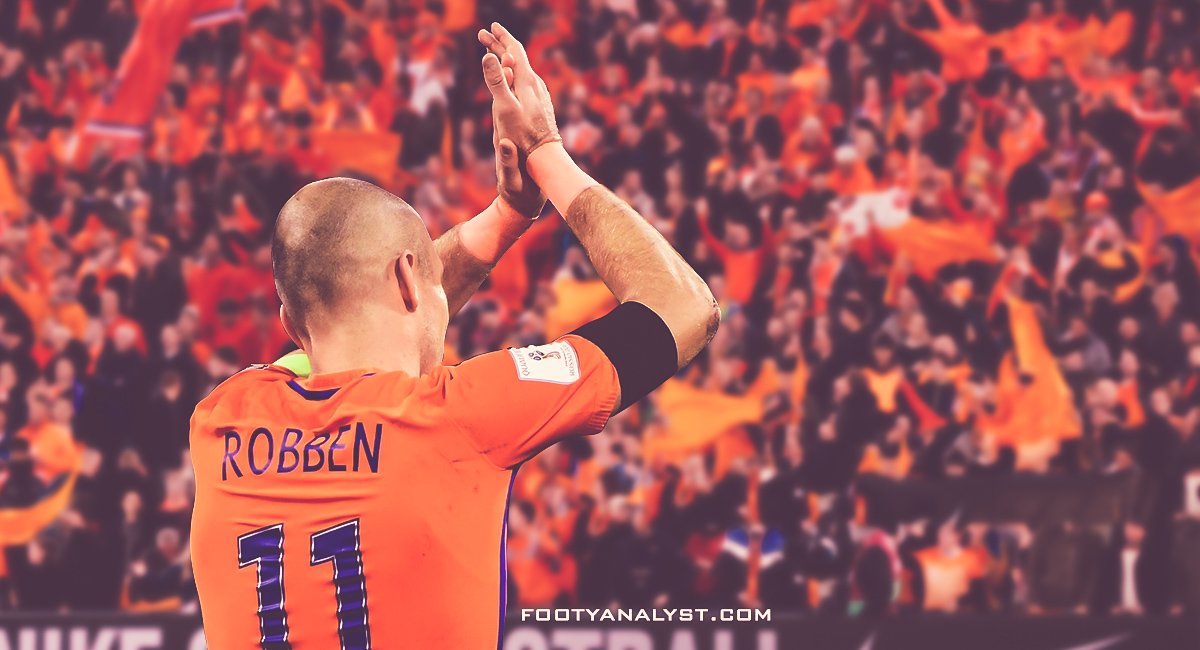 In October 2017, Arjen Robben decided to retire from international football after his country missed out again on a second consecutive major tournament. Fourteen years of being the main man of the “Orange Eleven” ended in a tragic, unexpected and heartbreaking way. Netherlands watched the World Cup at home, vowed to be back and Ronald Koeman took over. Robben ruled out any chance of returning to Oranje earlier in 2018 after the new manager had a talk with him in Munich. At the end of last season, and after countless injuries during his career, most of which were serious and resulted in lengthy spells, the Dutch speedster decided to hang up his boots for good.

However, so much can happen in a year. Due to COVID-19, Euro 2020 has been postponed and the Glassman has decided to come out of retirement and intends to play for his childhood club FC Groningen. “Arjen has indicated himself that he has stopped at Oranje,” said Koeman. “As long as that doesn’t change, there isn’t really anything to talk about.” While Koeman’s intention behind the words are not clear, he will be letting Robben have the final say.

Under Koeman, new look Oranje have done well so far. They topped a Nations League group by beating the last two World Champions and made it all the way to the Final, and qualified easily to Euro 2020. That success in no way is an indication that Koeman will rely on youth and therefore will have no place for Robben next summer.

One of the mistakes that most coaches make is looking at short tournaments (Euro or World Cup) the same way they look at Champions League or a National League. In short tournaments, one cannot bank on a promising talent who might have a bright future. Developing talents is taken care of at the club level but in National Teams, you only need players who can make a difference or add something to the group. The international scene is no place to learn. In a Euro championship or a World Cup, a team does not play every week for 9 months. It can play up to 7 matches in just a month or it can be all over in less than a week. The perception of the coach should be totally different and hence, the choice of the players.

During the Nations League and the European qualifiers, and specifically against top teams, Koeman has always called up a squad of 30 or more players at first, eventually reducing it to 23. He will stick to the exact same method in May 2021 when he names the squad that would look to secure a second title in their history. These 23 players are divided as into 3 goalkeepers, 8 defenders and 6 midfielders, paving the way for just 6 wingers/forwards.

Based on an analysis of all the matches Netherlands have played in the past 2 years, the most forwards who earned playing time when fit were Depay, Promes, Bergwijn and Babel. Koeman will surely have faith in these players as it proves to be an international football culture to head into a tournament with the players who helped the most during its qualifiers. Luuk De Jong didn’t play much but he was always called up and preferred over Weghorst.

Also Read: Denied promotion despite being 25 points ahead, Stowmarket Town FC look forward to the future

Koeman is no longer starting with these types of forwards, but needs just one to complete the 23 man squad. He will look for someone who would provide an aerial threat and advantage when the team is dominating the final third of the opponent desperately searching for a goal, and playing long balls in the final minutes instead of building up from behind. It worked just fine with Luuk twice – against Germany in the Nations league second leg and against N. Ireland in Rotterdam. His place looks secure. One more place remains up for grabs and Arjen Robben, if fit, will compete with Malen, Kluivert, Danjuma, Dilrosun, Berghuis, Stengs and Boadu. It has to be noted that any injury for any of the starters will slightly increase Robben’s chances of a comeback.

Robben’s skills are no secret to anyone. Speed, dribbling, cutting inside, a deadly left foot and accurate crosses are just a few things he bring to the team. However, it takes hunger to win and the right mindset to still be on the same pedestal. After being the main Orange player who could alter the outcome of a match on his own in a moment of pure brilliance for so many years and single-handedly taking the Dutch to the third place at the 2014 World Cup, it is unlikely that Robben would settle with the way he retired from international duty. A careful dissection of his on-pitch character throughout the years would assure anyone that the injury prone winger is gutted, and if fit, will grab on to that one last chance for glory.

One might think that a footballer’s skills remain intact if he changes shirts. While that is logically correct, his efficiency may not necessarily be at the same level that it once was. The psychological factors that affect a player’s performance are being studied more deeply. Fitness, it is often said, is now 50% physical and 50% mental. Mentality plays an equally important role as the physical.

Also Read: The road ahead for Timothy Fosu-Mensah

How many football players today understand what it really means to play in national colours or give their National Team more than their club? That is a long debate that could only be launched on a case-by-case basis. To put it into perspective, the greatest Dutch icon of all times Johan Cruyff played just one World Cup for his country, whereas another Dutch legend, the 1992 FIFA world player of the year and the 3 times Ballon D’Or winner Marco Van Basten, scored his last goal for his country at a major tournament at the age of 24.

Another Ballon D’Or winner, a star and the captain of his generation, Ruud Gullit, walked out of the Dutch pre-tournament training camp and never played for his country ever again just before the 1994 World Cup that was already missing Van Basten. A dispute with coach Dick Advocaat about playing on the right wing or in a more central position led to a reckless and absurd decision that he regretted 19 years later on a Dutch TV program. “I don’t feel Dutch,” said one of the most decorated Dutch players and one of Europe’s best midfielders, Clarence Seedorf, before announcing that he won’t take part at Euro 2008 despite being selected by Van Basten.

It is best not to engage in controversial debates of comparing players from different generations, but the pride and honor that a player feels when wearing a the national shirt are easily detected. Arjen Robben certainly embodies the spirit of playing for his country more than the four legends mentioned above. Robben holding back his tears during the National Anthem in his last match against Sweden meant a lot for Dutch fans who are used to seeing similar behaviour and emotions from Dutch players when they are playing their last match for the club.

He was hit by misfortune during the last friendly against Hungary in the build-up to the 2010 World Cup. A hamstring tear was threatening his participation. They won this friendly 6-1 but the mood in the camp and the whole country was anything but happy. Robben literally made the medically impossible to regain fitness in time and travel with the squad to South Africa. A TV report following his recovery process showed an emotional Robben trying again, unsuccessfully this time, to hold back his tears. The rest is history.

Ever since he came on as a substitute in the 73rd minute in the third group stage match against Cameroon and all the way to the final, he was lethal and decisive. It is worth noting that few weeks later, Bayern Munich stated that medical tests confirmed that his injury had not been properly healed and that he would miss at least two months. He missed more than that. Bayern Munich and the Dutch Football federation went to court over this.

What can he offer?

In a UEFA European Championship with 24 teams, at least 8 teams have equal chances of lifting the trophy. Netherlands are, this time, among these eight. Very small details in modern football decide the outcome of the game. Any coach will surely emphasise on this, but it is only up to the player to carry out the execution. Koeman will need an experienced player who has mastered this and someone that has played for so many years at the highest level for both club and country.

Arjen Robben doesn’t need to start every game but he would certainly be required to step in at crucial moments. A perfect cross, a well taken corner or penalty, one dribble that can shake a solid defensive block, the courage and confidence to shoot from long distance, drawing a foul that would probably earn a free kick or cause a booking for the opponent, exchanging the right words with the referee and so on, are all the trivial details that make the difference between qualifying for the next round or going back home. One cannot expect an exquisite and flawless execution of these by Stengs, Dilrosun or Kluivert. A fit Robben is the final piece of the puzzle for this new-look-Oranje. His role can be vital on and off the field. His participation is key to a better ambience, better expectations and better results. He would not care about the shirt number or the captain’s armband, he’s too old and too professional for that.

At one point or another, Koeman has to make the call. The final decision will not only depend on the coach’s perception and philosophy, but also his ego since Robben denied the chance two years ago. If the end goal is the same, the process shouldn’t be hard, and not taking part in the qualifiers shouldn’t be an obstacle. Alfio Basile doesn’t regret calling up Diego Maradona for the 1994 World Cup and Raymond Domenech certainly does not bemoan tempting Zinedine Zidane to come out of retirement for the 2006 World Cup. Both Maradona and Zidane didn’t have ‘unfinished business’ with their National teams at that moment, but Arjen Robben certainly does.