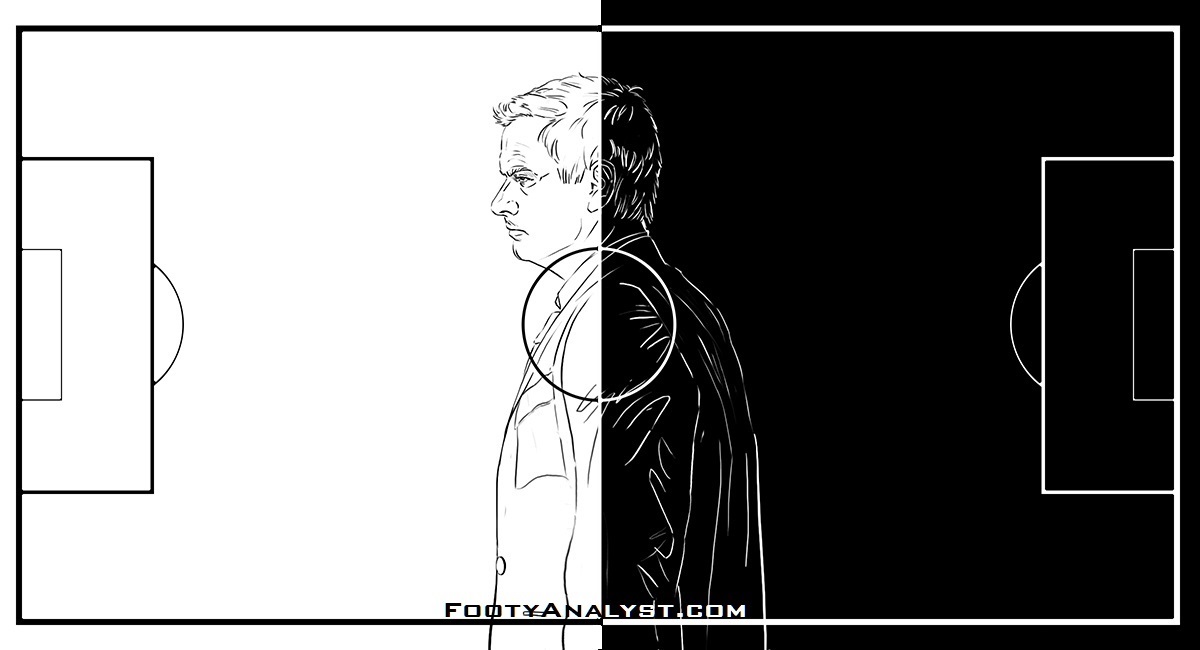 There is a running joke whenever fans catch sight of a team bus parking in a stadium garage – especially if it is one carrying a Jose Mourinho team – that this is a preview of the tactics that the team itself will be adopting during the game.

It is not a particularly funny joke, but it endures because there is a strong element of truth in it. Mourinho has built an extremely successful career based on being pragmatic. There is of course more to him than that – he is charismatic, his training methods were revolutionary, he is driven to succeed – but there is also no denying that his teams are built first and foremost on a strong defensive base.

That approach has served him very well over the years. Yet lately it has been much less appreciated, so much that he has found his last three managing jobs cut short by clubs eager for a more expansive way of viewing the game. It remains to be seen whether his time at Tottenham will be much different.

Playing defensive football worked at clubs that were, in one way or another, underdogs. At Porto it won them an unexpected Champions League, at Chelsea it meant a first league title in fifty yeas, whilst at Inter it led to a clean sweep of trophies to give them the ultimate bragging right over the perennially dominant Juventus.

Other clubs have been much less enamoured and their status probably played a part. Real Madrid and Manchester United are both clubs used to dominating games on the front foot. The Chelsea he returned to for his second stint was no longer a club willing to accept winning at whatever cost. Each time, patience quickly ran out as soon as Mourinho’s approach seemed to be faltering.

Mostly, however, his dismissals were down to how people felt about the way he set out his teams. At clubs for whom winning is second nature, there is the expectation of the adrenaline rush that comes from an aggressive, attacking approach to win the game. A more cautious way of playing might get the same kind of result but it is much more fraught on the nerves. In more blunt terms, at some clubs fans go to games to be entertained, and so they’re unlikely to be pleased with a hard fought 1-0 win.

All of this is fairly obvious. There is a certain degree of fearlessness shown by teams who go on the pitch looking to win that is liberating. Indeed, often when a new manager takes over from a defensive minded one, you can be assured that one of the first things that will be said is that he will take the ‘shackles off the team’. It is an easy way for him to score some points with the new fans.

There also seems to be less pressure when you go out to win because of the realisation that mistakes are likely to happen. What drives you is the desire to make sure that any mistakes are overshadowed by the positive that happens in a game. This opposed to the attitude when you are trying not to lose as you know that any mistake might prove to be decisive.

The pressure in the latter case can be crippling.

Ultimately, then, the approach is down to tolerance of risk. If you play to win you are willing to take more risks than if you simply go out looking not to lose.

This discussion about acceptance of risk was one of the key elements of Po Bronson and Ashley Merryman’s book Top Dog: The Science of Winning and Losing.

Essentially, if you focus on the risk you tend to get overwhelmed by the possibility of failing.

To demonstrate this, the book quotes a study carried out by psychology professors Adam Alter and Joshua Aronoson on Princeton undergrads who were presented with a number of test questions. For half of the participants, the test was framed in such a way that it would evaluate their ability and that effectively it would determine whether they were good enough for such a high-ranking school.

The other half of the students received the same questions but with a different framing. Indeed, for them the test was titled “Intellectual Challenge Questionnaire” whilst the questions themselves was portrayed as being brainteasers rather than judgement.

In both cases, students weren’t expected to get them all right. Yet, whilst the second group got 90% of the answers right, the first group got just 72% correct.  For the first group, the fact that they were made aware that of the risk put them on the back-foot and that pressure ultimately led them to perform worse. On the contrary, the others were freed from such shackles and hit their potential.

All of those who took part went in wanting to do as well as they could, at least superficially. Those who focused on the risks of doing poorly ultimately held back and did worse, as a group. The other cohort simply went out to enjoy the challenge – they were free to go out and win – and they ended up performing better.

It would seem natural, then, that the demarcation line between playing to win and playing not to lose is also that which separates winners from losers. If you focus on the risks you are likely to play within your abilities and, as a result, lose.

But that’s not exactly the case.

For two decades, one of the prevailing and most successful tactics in football was that of the catenaccio. This dictated that a team should first and foremost look at making it as hard as possible for the opposition to find a way through; that you started the game with a point and you should do your utmost to at least end the game with a point.

Teams adopting such a style won domestic leagues, European Cups and even World Cups. They played in a manner that focused on the risk of conceding a goal and did their utmost to avoid it. And they were successful.

Not many – if at all any – teams play in that manner now. Perhaps three of the high profile teams in recent years to have adopted such a defensive tactic with any degree of success were the Greece side that won the European Championship in 2004, treble winning Inter Milan in 2010 and Chelsea in the 2012 Champions League.

Also Read: FOCUS – An underrated variable for success in Football

Yet, there are still managers who put safety first. Roy Hodgson, Sam Allardyce and David Moyes fall into this category and, whilst it may be easy to denigrate them, they’ve enjoyed long careers at the top end of the game precisely because of the way they set their teams out to play.

Or, more accurately, they set up in a manner that best suits the talents of their players. And they are exceptionally good at choosing players who can withstand the unique kind of pressure that playing not to lose brings with it.

These people are comfortable with risk. They’d much rather take a chance and fail than holding back only to feel that they missed an opportunity. Typically, however, this also means that they aren’t particularly good at finding ways out of situations where this approach does not work. Their way of viewing things can be rather blinkered and setbacks have a big impact.

On the opposite end of the scale there are those who are prevention focused. What this kind of people value more than anything is to feel secure so in order to do so they adopt a more conservative approach. They are driven by the desire to avoid criticism and the feeling of being blamed for when things go wrong.

Those who are prevention focused want to avoid making mistakes. Indeed, what they fear most is to make the decisive mistake; the bad pass that leads to a goal conceded or an attack that leaves them open to a counter-attack. Yet being prevention focused should not be considered as necessarily negative trait because it also means that they tend to be methodical and careful, that what they do is as accurate as possible.

That is something to keep in mind when labelling managers like Hodgson and Moyes as prevention focused as a thinly veiled criticism. It is true that they set out their teams to avoid conceding, but, given that they often take charge of teams who do not have the resources to compete with the bigger teams, that is often the best option. If these teams were to adopt an open approach they would more often than not end up losing. Playing defensively is the way in which they can even the odds.

So, the mere fact that they do so is not a problem.

What is a problem is when this culture collides with the opposing one. A promotion focused player in a team with a preventive focused manager is often doomed to fail. Similarly, put that same manager in charge of a group of players who expect to play on the front foot and the results will not be pretty. One only has to look at how Moyes did at Manchester United or Hodgson at Liverpool.

It is precisely because of failures like those that there is such a stigma. And yet the failures of Frank De Boer at Crystal Palace and Maurizio Pellegrini at West Ham are just as significant. Not because those two managers were necessarily bad, but because they went out looking to win at clubs better equipped at avoiding a loss.

Mistakes like that tend to happen at clubs where there is not a well-defined view of where they are or, more likely, are looking to transition from one way of playing to another. They believe that simply by bringing in a manager with a different outlook will be enough.

The reality, however, is much more different to that.

Emotional Intelligence: How emotions are managed to achieve success in football coaching
In your eternal debt, Leo
To Top