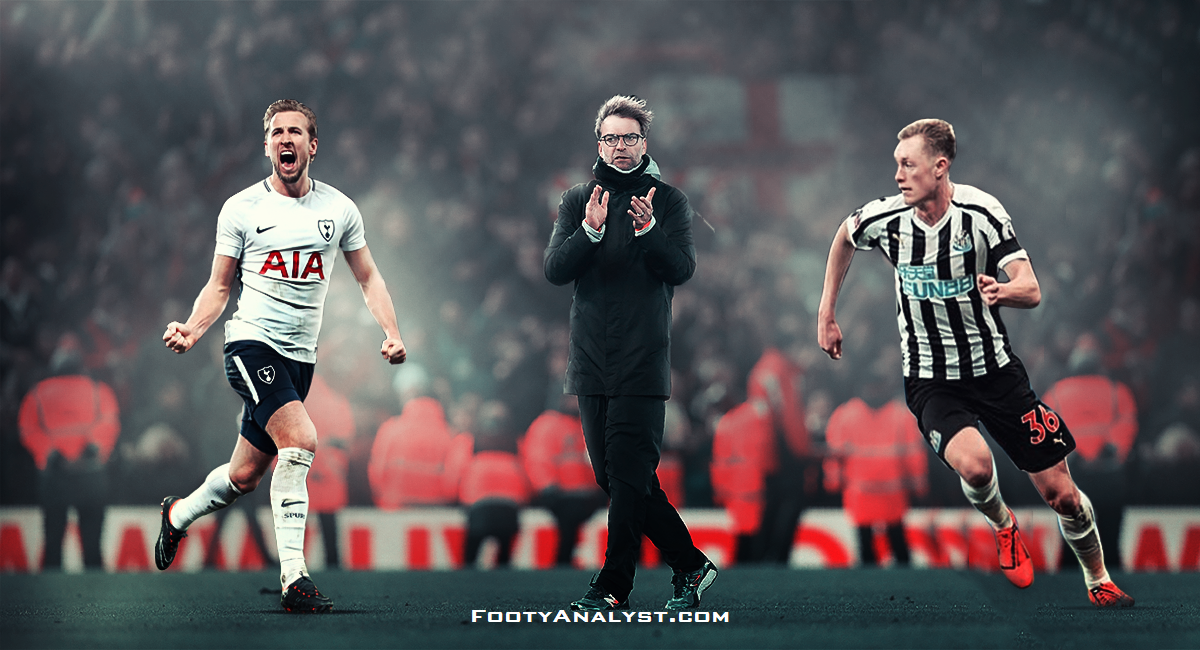 When Newcastle’s already thin squad was hit with injuries to Jonjo Shelvey and Momo Diame, it seemed as if fate was targeting Rafa Benitez. The Spaniard had warned of the need for more players but that had gone unheeded. He now faced the ever more challenging task of keeping the side in the Premier League without two key players.

Desperation saw him turn to Sean Longstaff, a twenty-one year old academy product with minimal experience, to fill the gap. Surprisingly, Longstaff flourished. Two footed, blessed with vision and exceptional passing skills, he not only fit into the side but actually looked like a significant improvement until an injury of his own cut short his season.

Also Read: Vítor Frade and the world of Portuguese managers in the game

After watching Longstaff play, it seems obvious that he was destined to make it in the Premier League. Yet, it took a stroke of luck – if that is what an injury to two fellow professionals can be called – for him to get an opportunity. This is a player who had never been called up by England at youth level and who probably would have gone out on loan had Newcastle strengthened as much as the manager had wanted.

The very idea that all of the players who have the talent get to play at the highest level is an inherently flawed one. Take Harry Kane as another example. Today there is little doubt about his ability and yet he needed his own stroke of luck to get his opportunity at Tottenham. That came in the form of the appointment of Tim Sherwood, someone who strongly believed in the talent of those who were coming through the youth system and stood by them as they found their feet.

Sherwood ultimately did not stay too long as Spurs manager but it was enough for Kane to show how good he was. Suddenly, this player who had previously been considered good enough only to play for struggling Championship sides had emerged as one of the most lethal finishers in English football. Luck had played as much of a role in getting him to the peak as talent.

In 2018, three researchers from the University of Catania – Alessandro Pluchino, Andrea Rapisarda and Alessio Emanuele Biondo – set about trying to confirm the relationship between these two factors. Their results, shared in a paper titled “Talent vs Luck: the role of randomness in success and failure”, are extremely insightful.

In their work, they built a ‘Talent vs Luck’ model to describe the evolution of careers of a group of people and to what extent they are influenced by lucky or unlucky random events. Their results clearly prove that “the most successful agents are almost never the most talented ones…the model shows the importance, very frequently underestimated, of lucky events in determining the final level of individual success.”

The paper states that “If it is true that some degree of talent is necessary to be successful in life, almost never the most talented people reach the highest peaks of success, being overtaken by mediocre but sensibly luckier individuals.” They go further, describing the inability to grasp the role of luck as “naive meritocracy” or the naïve belief that talent will always win out. The reality is that people have the tendency to build the narrative to fit this mental model.

In this respect they refer to the idea of “narrative fallacy”, a term coined by Nassim Nicholas Taleb. “Narrative fallacy and hindsight bias operate with particular force when people observe unusually successful outcomes and consider them as the necessary product of hard work and talent, while they mainly emerge from a complex and interwoven sequence of steps, each depending on precedent ones: if any of them had been different, an entire career or life trajectory would almost surely differ too.”

It is narrative fallacy, for instance, to claim that Harry Kane’s evolution into one of the finest strikers in the game was inevitable given his talent. His instinctive ability to be in the right place or the power in his shots helps but he has also had to work very hard to improve the various areas of his game that needed work in order to be good enough for the Premier League. More than that, he was lucky that Tim Sherwood got an opportunity as Spurs manager.

That period might not be viewed overly fondly by most Tottenham fans but it was a crucial one for Kane. Suddenly, there was a manager who not only was willing to grant him the opportunities that he needed but was also patient enough to leave him in the side when he initially struggled. Eventually Kane found his feet and Sherwood’s faith was rewarded. Would the same have happened if there hadn’t been a change in management? Possible, but unlikely.

Also Read: Bosman Ruling, Brexit and the Impact on Football

Take the case of Liverpool’s appointment of Jürgen Klopp. His last season at Dortmund had been disastrous and there were those who said that this was down to the speed that he wanted his football to be played at, which ended up grinding down players. From the outside looking in, anyone who witnessed how hard his teams pressed would have identified an element of legitimacy in that claim. Alternatively, it was also said that his way of playing had been ‘found out’ and other teams knew how to counter his tactics. It is something that Liverpool wanted to check before approaching him to manage their club but did so by looking at the numbers.

“Earlier that fall, as Liverpool was deciding who should replace the manager it was about to fire, Graham fed a numerical rendering of every attempted pass, shot and tackle by Dortmund’s players during Klopp’s tenure into a mathematical model he had constructed,” Rory Smith recently wrote in a piece for the New York Times which featured Ian Graham, Liverpool’s director of research. “Then he evaluated each of Dortmund’s games based on how his calculations assessed the players’ performances that day.”

“The difference was striking. Dortmund had finished seventh during Klopp’s last season at the club, but the model determined that it should have finished second. Graham’s conclusion was that the disappointing season had nothing to do with Klopp, though his reputation had suffered because of it. He just happened to be coaching one of the unluckiest teams in recent history.”

Those numbers showed that the arguments made for his final season were merely ‘narrative fallacy’. It wasn’t the only reason for which Liverpool made the move for Klopp but at least it gave a degree of reassurance over his appointment.

The right algorithms can allow clubs to acknowledge and quantify the role of luck when they come to make crucial decisions. The impact of this cannot be understated. Yet there is more that clubs can do with the search for talent being one other area where they can manage the odds to be luckier. Most clubs will have set areas and leagues that they cover to look for players that they could potentially add to their sides. For them these will represent the obvious and only options in which they can look.

One club that has tried to subvert this is Udinese. Before over-extending their focus with the acquisition of Watford, the Friuli based side had a reputation as one of the most capable at identifying talent in previously untapped areas. Samir Handanović was signed from NK Domžale, a side that had just been promoted to the Slovenian top-flight. Mehdi Benatia from Ligue 2 side Clermont, having been released by Marseille two season earlier. Alexis Sanchez came from Cobreloa, a second division Chilean side.

Again, would the talent of those players have been enough for them to eventually come to the fore? Maybe, but Udinese made sure that they didn’t leave matters up to fate. They realised that financially they could never compete by looking in the same places as others and so opted to do things differently. They did not wait to find a player that maybe a bigger side had overlooked but looked where no one else was; they made their own luck.

To do this, they shifted the attention of their network to cover as many youth international tournaments as possible while focusing on South America along with lesser European leagues; the top five are barely considered. They also established contacts with junior and smaller clubs in these same countries, giving them incentives for alerting them of any talents they should keep an eye out for. In doing so, they ensured it wasn’t luck that saw them find the talents they did but rather the result of strategy.

For bigger clubs, this might not be necessary. Then again, they too could work against the influence of luck. One simple example lies in their recruitment of players for the academy; both by making sure that they look everywhere – including areas with social issues – and making life easier for any prospects in these areas. This could be something simple like paying towards improving facilities and coaching to more organised initiatives where they handle travelling. Apart from the social obligations to the communities in which they are based, this helps ensure that those with raw talent get the opportunity to develop it.

This brings us full circle with the notion that those who are good enough will make it. The reality is that if no one is looking, then you might well be talented but no one will know how good you are. Indeed, rather than limiting to role of luck, most football clubs actually reinforce it by inviting in those who already have a degree of luck by coming from homes without serious social issues.

The reality is that, whilst many would not like to admit it, luck plays a fundamental role in football. Sometimes there’s nothing that can be done about it; a ball caught in the wind just enough to bend it beyond a goalkeeper’s extended hand or a key player getting injured on the eve of a crucial game or the crossbar preventing the ball from going in. But there are many other instances where clubs can do a lot to shape their own luck. All they need to do is be alive to the possibilities.

A love affair with Dutch Football
JDT & Argentina: A Distinctive Relationship in Malaysian Football
To Top