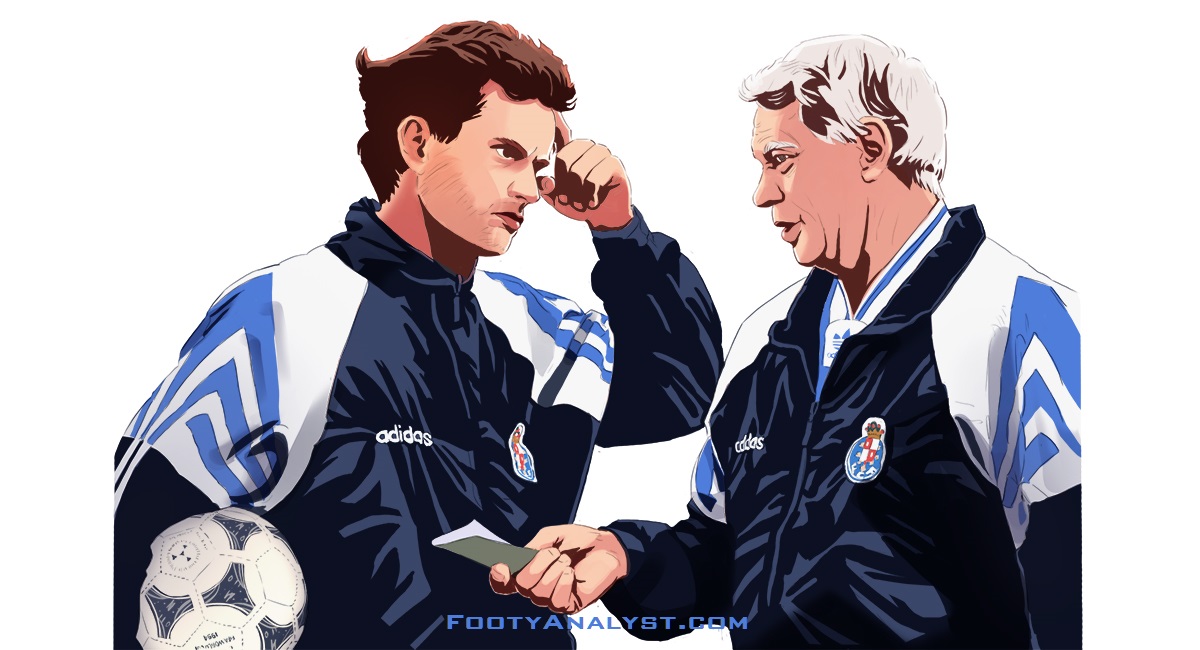 After Robson was harshly sacked by Sporting president Sousa Cintra, with the club top of the league and heading towards their first Portuguese championship title for a decade, the out of work Englishman was quickly snapped up by Porto, and the former Three Lions manager continued his European sojourn with a move to the Estádio das Antas in January 1994. Significantly, he also took José Mourinho with him as his assistant.

As is so often the case when a new manager joins a club, when Robson arrived, Porto were suffering a period of decline. A fall in performances had seen the club slip away from their traditional place near the top of the Primeira Divisão, and crowds at the Antas had tumbled to around 10,000, echoing around a stadium built to accommodate more than five times that amount. In typical Robson fashion, however, the renaissance was put into place without delay.

Brazilian coach Carlos Alberto Silva had delivered successive titles for the club before returning to his native country to take over at Cruzeiro and had been replaced at the start of the 1993-94 season by former coach, Tomislav Ivić. In his first period with the club, the Croatian had enjoyed plenty of success, but this was a different time and with Ivić struggling and the club’s fortunes plunging, Porto chose the season’s winter break to move him on and insert Robson.

By season’s end the decision had been massively vindicated, and Robson had the club pointing in the right direction once more. Porto had closed the gap behind champions Benfica to a mere two points and, but for a home defeat by Sporting against the Lisbon club on 14 May, Robson may even have snatched the title. The change in fortunes was also reflected in European competition. The league title won by Silva in the previous season had granted Porto entry into the Champions League but, by the time Robson was appointed, their progress in the group stage had faltered following a punishing 3-0 defeat to AC Milan.

Robson rallied the team though, and despite losing to a goal just two minutes from time against Anderlecht in Brussels, a win in the return game, a thumping 0-5 victory away to Werder Bremen and a creditable draw against Milan, saw Porto finish in second place and advance to the knockout phase with the victory over Bremen proving decisive. The Bundesliga club finished two points behind Porto and Robson had guided his new club to the semi-finals. A pairing with the winners of the other group, meant a visit to the Camp Nou to face Barcelona, and a 3-0 defeat ended the European adventure.

Success was achieved though in the domestic cup competition. A 6-0 victory in the quarter-final of the Taça de Portugal over second tier club Desportivo das Aves took Porto into the last four and a tie with Estrela da Amadora. Played at the Estádio José Gomes in Amadora, the 1-2 victory looks closer than it actually was. The home team’s goal only coming as a late consolation penalty when the game was already settled.

As fate would have it, Porto’s opposition in the final was none other than Sporting, the club that had sacked Robson six months earlier. Following a goalless draw on 5 June, the replay decided the destination of the trophy five days later, when an extra-time goal from Brazilian defender Aloísio gave Robson the cup and perhaps one of his sweetest victories. Robson now had some success to build on.

Fate also delivered something else for Robson to build on. Living in the same apartment as the Englishman was a 16-year-old football obsessed boy called André Villas-Boas. The precocious youngster would slip notes under Robson’s door, offering him advice on suggested formation, team selection and tactics. On occasions, the young man would also accost the manager on the staircase in the building, over perceived errors. So many others in a similar scenario would have simply rebuffed the overly enthusiastic Villas-Boas, but the kindly and astute Robson saw something in the teenager and offered him support and encouragement instead.

He would appoint Villas-Boas to work at the club’s observation department, where he came into contact with Mourinho, and later assisted him in gaining his UEFA ‘C’ coaching badge at a course in Scotland, whilst also arranging for him to spend time observing training at his old English club, Ipswich Town. Unknowingly, Robson had mentored two men who would later lead Porto to domestic and continental success. Over the next couple of seasons though, despite serious health issues, the former England manager would enjoy triumphs of his own.

In his first full season, the club suffered a traumatic loss when 26-year-old midfielder Rui Filipe was killed in a car accident on 28 August 1994. The new season was just a week old and Robson was compelled to guide his team through a season when, for so many, football seemed a peripheral matter. The club rallied though and, by the end of the term, sat atop the Primeira Divisão table by a clear seven points from Sporting, with Benfica trailing in third place, a further eight points adrift.

There was a particularly sweet moment for Robson when the title was secured with a 0-1 victory away to Sporting. Robson was not the sort of person to seek out the man who had dismissed him, in order to gloat, but there would doubtless have been a small measure of satisfaction for him in winning the title at the Estádio José Alvalade. There was also success in the Portuguese Supertaça. Repeating their success over Benfica in the previous year’s final, Porto again triumphed over the Lisbon team, securing the title on away goals with a 1-1 draw in the capital and a 0-0 draw at home.

The following season began with great expectancy, as a new contract was offered and accepted by Robson. Fresh from their title success, Porto launched into the new term determined to retain their title, but ill health befell Robson. In the early months of the season, he was diagnosed as suffering from a malignant melanoma and would be absent from the team for a prolonged period. For anyone, it was a trying time, but cancer had haunted Robson since a first diagnosis back in 1991. It’s a tribute to his strength of character and immense commitment that he could, once again, overcome the illness that so many others had succumbed to.

Fortunately for Porto, by this time, the manager’s methods and tactics had become ingrained at the club and, when he returned to pick up the reins, was able to guide them to that second successive title. This time the gap to the runners-up, Benfica, had grown to 11 points. Sporting would have surely been ruing the haste with which they dismissed the manager who had now come to dominate Portuguese football. They finished in third place, 17 points adrift of the champions.

So dominant was Robson’s Porto in the 1995-96 that their total of 84 goals across a 34-game league season was 15 clear of the next highest total and their defensive record of conceding a mere 20 was also the best in the league. Goals had now become the currency of choice at the Estádio das Antas, and the players and fans of the club were cashing in. Domingos Paciência secured the Bola de Prata title as the league’s highest scorer and Robson was lauded as ‘Bobby Five-0’ for the number of times the club recorded victories by that margin.

The impression Robson was making in the country also spread beyond the confines of the Porto stadium. Then, an aspiring young coach, who would later work for clubs across the world, including a period as an assistant to Jesualdo Ferreira back at Porto in 2008, José Gomes would often skip university commitments to watch Robson carry out training sessions with his players. There were far more important lessons to learn from watching the veteran English coach, than to be garnered from sitting behind a desk.

“The way that this man, in his 60s, passed such passion to his players.” He remembered. “I looked at him and it was impossible to split him from English football. He was like a symbol of what English football means.” Gomes vividly recalls a drill in which António Folha, the Portugal winger, enraged Robson with repeated errors. “He was shouting at him, ‘Stupid, stupid,’” he says. “But a few seconds later Folha, in the same exercise, did well and Robson dropped to his knees on the ground [he mimics a figure with arms aloft], shouting, ‘Fantastic. Fantastic.’ The guy is 62 and living one simple football exercise with such intensity and love. I keep this picture in my mind for ever, because it is the way a manager must respect his job.”

Contented with the lifestyle in Porto and energised by the success the club was enjoying, Robson was settled in Portugal, with surely only two possible jobs that could lure him away. One would be the challenge to take over at his hometown club, and revitalise the fortunes of his beloved Newcastle United. His chance to do so would come along later. Before that though, a telephone conversation with Joan Gaspart, the vice-president of FC Barcelona would lead to a chance to coach at perhaps the most famous football club in the world. It was the second of those two jobs that simply couldn’t be ignored.

In his two full seasons with Porto, Robson would win no less than 55 league games, losing a mere three. His team would score 157 goals in 68 games, conceding just 35 and deliver successive Primeira Divisão titles to add to a Taça de Portugal triumph and successive Supertaça; all that despite being struck down with a life-threatening condition. In 2016, Futebol Clube do Porto commissioned a statue of the then sadly departed Robson. It sits on a bench overlooking the 18th green at the Pestana Vila Sol Golf course in Vilamoura, a favourite spot of Robson’s. It seems an apt reflection of the affection the club had for Bobby Robson.