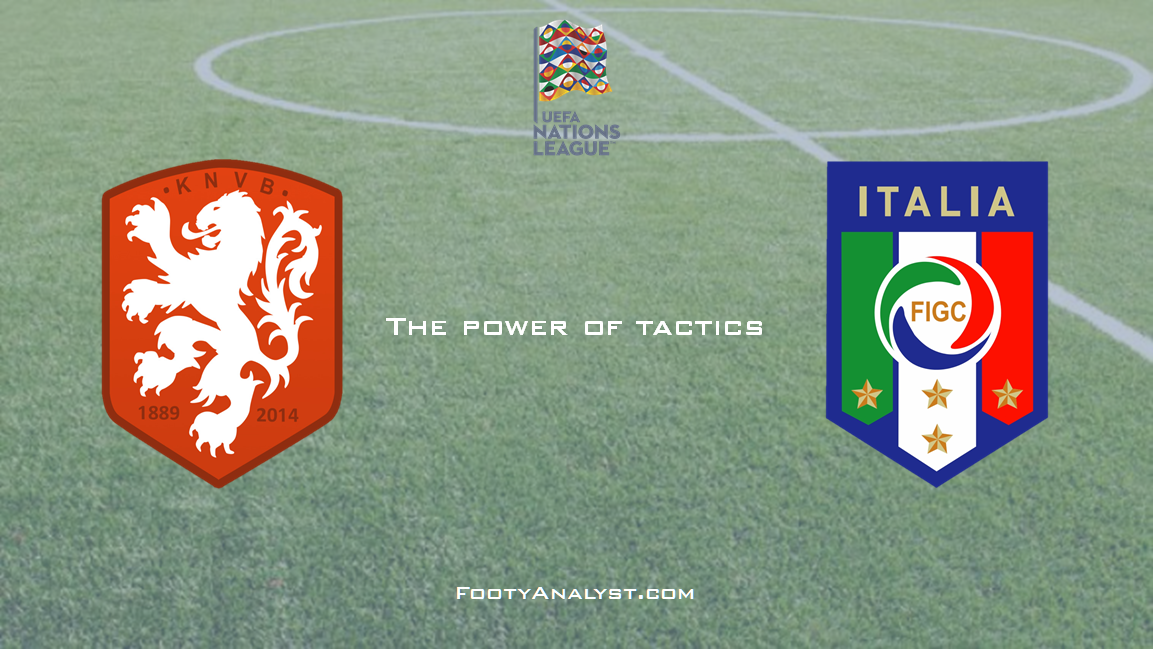 Italy faced the Netherlands in the second season of the UEFA Nations League in the second week of September 2020 and kept a positive record against the Dutch in recent history, not surprisingly similar to their record Vs the Germans in international competitions. Very rarely in the past 30 years, the Italians had a better and more talented group of players than the Dutch, yet their last loss goes back to Euro 2008 group stage phase. The root cause for this was the power of tactics, realistic football and the freedom of the National Team’s coach to deploy the style and formation of his choice.

What was eye catching from the Italian side in this match was the complete shift from their historical traditional style. No more Catenaccio and reactive football with 9 players behind the ball, no more “door-bolt”-sit-and-wait style, but a high press when out of possession and building up every attack from the goalkeeper when in possession was the style adopted by Italy.

It is always easier to defend in numbers than to attack. It took a lot of courage from Mancini to change the old style that provided results most of the time and granted them four World Cups even when they were not between the top five favorites prior to the competition. There’s no doubt that he was partly influenced by Gian Piero Gasperini’s revolutionary season with Atalanta. He deserves, however, a lot of credit because usually when a team is in a transition phase of style, re-building and restructuring with a new philosophy, it takes time to deliver results specially against top teams. So how did he prepare for the match? What were the main tactics and instructions? What were the conclusions drawn from the Dutch’s match against Poland?

When out of Possession

He first acknowledged the major Dutch players missing out due to injuries who happened to be all in defense: No de Ligt nor de Vrij to partner van Dijk in the heart of defense, and the usual right back starter Denzel Dumfries was also out for another reason. Nathan Aké is faster than Daley Blind, one step ahead physically and defensively, but certainly not with the ball at his feet.

Joël Veltman and Hans Hateboer are class B defenders and started the game only because of the above absentees. With three average defenders out of four in the build-up phase, it would be difficult for the Netherlands to move the ball to the opponent’s half. Therefore, a high press was requested from Mancini, all the way up to the inside of the Dutch penalty area.

When Jasper Cillessen or any defender under pressure decided to go for the long ball, the Italian midfielders and defenders were ready for the aerial duels and won the majority of them, 12 out of 16. That out-of-possession-tactic from the Italians resulted in just one weak shot on target from the Dutch during the first half and it was by an individual moment of talent and class from Wijnaldum.

“We have won four World Cups in the Italian way but the days of playing counter attacking football are over,” Mancini said at an event in Genoa. On the pitch, that means keeping the ball is now fundamental and that can only be achieved if the attack starts from the back, from the goalkeeper even at the highest pressure, by making quick decisions and short passes in order to move the ball into the opponent’s half. It was a brand new style for the Azzurri, but the execution was remarkable.

The Dutch, on the other hand, unexpectedly chose to grant the Italians a breathing space by starting to press twenty meters away from Donnarumma. That was a huge mistake and the choice to do so from Dwight Lodeweges remains up for question. They only switched to an advanced press in the last minutes when it was too late.

Mancini had noticed the lack of balance in quality within the four Dutch defenders from the Netherlands Vs Poland match. With due respect, Hateboer and Veltman are not of the same caliber as van Dijk and Aké. Therefore, the plan had to be to engage in as much one-on-ones with the first two. A good way to pull this off is a modern football tactic called “Overload to Isolate” or also called “Horizontal Provocative Pressing”.

The Italians overloaded the Dutch left side area where Aké is positioned without trying to penetrate, and then quickly switched via one pass to the opposite area where Hateboer was almost always alone and left in a one-on-one duel against Insigne. The Italians executed this principle perfectly throughout the first half and it was shocking how the temporary Oranje Bondscoach failed to react tactically until his team conceded the goal. It was crystal clear, from the tenth minute, that the Italians were creating scoring opportunities from Hateboer’s side as their chances to score from that side were high.

Another obvious and clear instruction from Mancini to his attackers, mainly Immobile, was to ask for the ball only when he makes the run towards Veltman, where it is more probable to dribble and penetrate the Dutch’s final third. The idea was to avoid challenges with van Dijk and to try to breakdown the Dutch from where Veltman was positioned. Even though the result turned up to be positive for the Azzurri and the tactics were well implemented, it is needless to mention that Insigne and Immobile are not the world’s best in take-ons, and players like Neymar, Hazard or Kingsley Coman could have made it much worse for the Dutch.

From the Dutch side, no major tactical changes were made from the Poland’s match. The Dutch keep on suffering against well-organized and aggressive teams. When the team sheet was released featuring four midfielders, one might have thought that a 4-4-2 formation would be deployed for the first time in many years, only to notice from the first 15 minutes that that’s not true.

Wijnaldum replaced Bergwijn on the right wing instead of being a right midfielder and Donny van de Beek replaced Wijnaldum in midfield, and both rarely helped Hateboer in defense. A double poor decision and two meaningless positional changes contributed to occasional loss of balance in the first half. In the past 30 years, fans have never seen the Dutch National Team losing a match at home while keeping the ball only 43% of the time and completing lesser passes than their opponents, 321 to 488 for the Italians.

In the World Cup 2006, one could name at least four better teams than Italy. Despite the Calciopoli scandal, Marcello Lippi was able to reverse the effect and form a strong unity and good mood within the team and went on to win the country’s 4th title. From a psychological aspect, one would guess that Mancini will try to do the same in the next summer’s tournament, using the fact that Italy suffered tremendously and were one of the world’s worst hit countries by the global Coronavirus pandemic.

“Singing the anthem is something that really motivates us together with the crowd,” said Mancini before the game. Add that to their “chronic grinta” and the quality of the current group of players, they will be serious contenders to go all the way. The Dutch, on the other hand, masters of innovation and creativity, founders of attractive football principles and philosophies, are becoming too predictable and proved not able to cope without some of their usual starters. Their typical justification of “It was not our night” is mediocre to say the least. They looked vulnerable and shaky in defense without de Ligt and de Vrij and it would be intriguing to learn how they would manage a match without Frenkie de Jong.