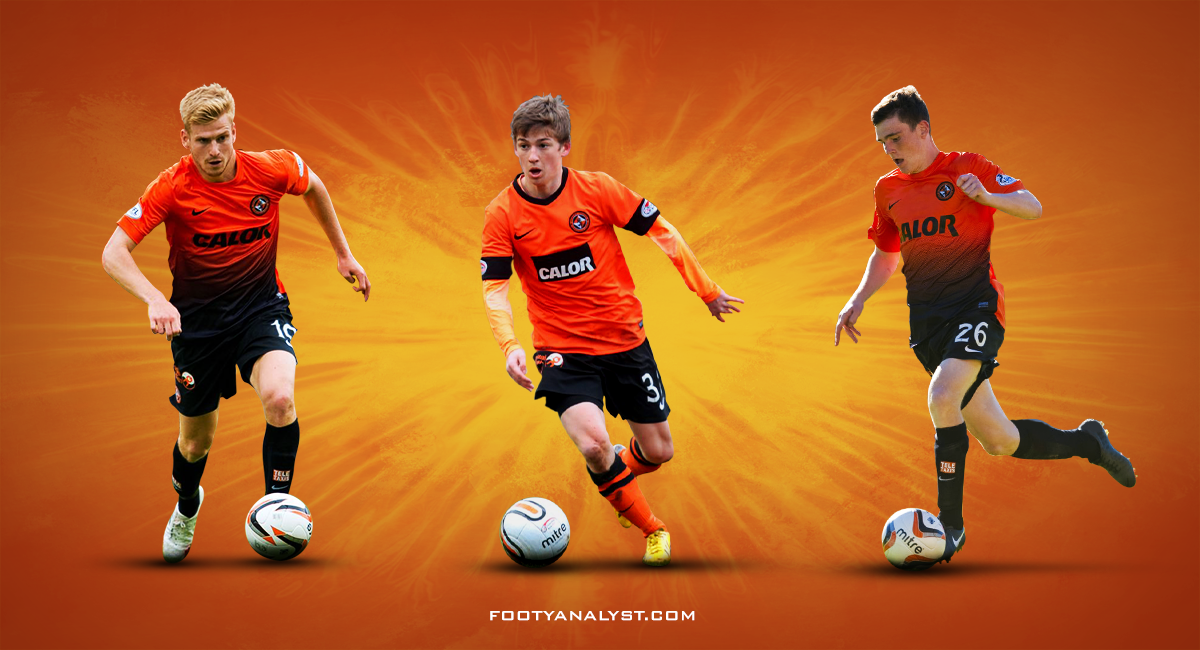 Cast your mind back to the summer of 2014. It was one of those rare times when footballing matters north of the border were causing ripples throughout the country – one man’s name was lighting up the gossip columns: Ryan Gauld. He was dubbed “the mini Messi”, and he was linked to an array of top clubs: fans dutifully flocked to YouTube, finding themselves immersed in Dundee United highlights. His talent was apparent for all to see, and although the nickname is not a fair tag to place on any teenager there was at least a passing likeness to the Argentinian great. He had a tendency to simply appear in dangerous areas, gliding around the pitch so as to always be on hand to play the killer pass or apply a clinical finish; aesthetically, if nothing else, his low centre of gravity when dribbling was genuinely reminiscent of Barcelona’s man.

Most people did not pause to look any further than this mercurial talent, blinded to the rest of the men in tangerine and black by Gauld’s exquisite arsenal of trickery, playmaking and propensity for scoring. Talent scouts were less blinkered, however. Gauld was the biggest of the transfers, fetching £3 million from eventual buyers Sporting Lisbon, but two of his teammates that season also raised sums upwards of £2 million. These were far from trifling amounts for a Scottish side, particularly outside the economic might of Celtic, and it was quite remarkable to have such an array of valuable talent contemporaneously plying their trade at Tannadice Park.

Stuart Armstrong and Andy Robertson were the other team members to fetch the big fees. They are now, of course, highly familiar names. The two men, somewhat lost in the hype over the young Gauld, now ply their trade in the Premier League. Armstrong earned his move to Southampton last summer following a successful spell with Celtic, and Robertson has been a Champions League finalist with a Liverpool team in which he is now a mainstay. At 23, Gauld has returned to Scotland on a loan move to Hibernian. He appeared just five times for Sporting’s senior team and has endured a succession of uninspiring loans.

As for Dundee United, the summer losses of Gauld and Robertson followed by the sale of Armstrong to Celtic six months later proved too much to cope with. They survived for one further season, in fact dropping off just one place in the campaign immediately following the departure of Gauld and Robertson, but the loss of talent was firmly felt in 2015/16 when relegation hit the club. It is duly tempting to paint this as a sad tale: one of huge disparities in the economic resources of football clubs leading to a talent drain and an ultimate demise, or else of a young player with the world at his feet but the weight of it weighing too heavily on his shoulders.

In the end, though, there is no reason why the Dundee United side of 2013/14 should not simply be celebrated for what it was: an unlikely collection of talent who produced some of the most exciting football Scotland has witnessed in recent years.

The nature of these three talents gave the Dundee United side a potent threat across the whole width of the pitch. Gauld could pop up anywhere but tended to start from the right, Robertson had even more freedom to make his lung-busting runs from left-back than he is currently afforded under Jurgen Klopp, and Armstrong provided the lynchpin in the middle. Robertson chipped in with five goals, a tally indicative of the amount of time he spent high up the pitch. He also provided a constant threat from crosses, a talent for which he is now renowned. His targets in those days tended to be Nadir Çiftçi or Gary Mackay-Steven, however, not Roberto Firmino.

Gauld got 8 goals as well as reaching double figures for assists, showcasing the diversity of his strengths. Stuart Armstrong, meanwhile, managed 11 goals from his advanced midfield role. Three of these were scored on an impressive run to the Scottish Cup final, which saw the likes of Inverness CT and Rangers brushed aside. In the end they were thwarted in the final by St Johnstone, however, losing 2-0. This defensive fragility was a feature throughout the season, and ultimately prevented a very good league campaign from being a great one.

United were the second-top-scorers in the division, with only a juggernaut of a Celtic side spearheaded by a lethal Kris Commons finding the net with more regularity. It was at the other end where problems presented themselves, with the team managed by Jackie McNamara conceding the second most of the top six. Perhaps if it had not been this way, though, it would not have been as exciting or as memorable.

One of the goals that stands out is a Gauld strike against Motherwell. Robertson was occupying two men down the left, which gave Armstrong the space to thread an inch-perfect through-ball to Gauld. His movement and acceleration got him clear in the box, and he slotted home with precision. It was imperative to create combinations between these three, who in truth were a cut above the rest of the squad and indeed much of the rest of the league. If this meant sacrificing a degree of defensive discipline, it was a fair trade-off. Certainly the attacking focus did no harm to Ryan Gauld’s stock, which had risen meteorically by the end of a season in which The Terrors finished a highly impressive fourth.

Despite the heightened media frenzy for Gauld, no doubt prompted in part by his unfortunate nickname, it was Robertson who was awarded the SPL Young Player of the Year Award come the end of the campaign. He featured alongside Virgil van Dijk in the lineup, something he of course now does for real on a weekly basis since the two have united at Liverpool. Indeed, of the trio of Dundee United stars, only Gauld missed out on a place in the Team of the Season. He was a fellow nominee for the Young Player award, but was pipped to a place in the overall top side by teammate Nadir Çiftçi.

The Turk benefitted from being the front man in this overtly attacking outfit but has faded into complete obscurity in the mean-time, and now turns out in the Turkish second tier. This goes to show how unrepeatable the circumstances of the 2013/14 campaign were. Çiftçi bagged eleven league goals, a total he has yet to surpass in his total time at any of his subsequent clubs. Sometimes, everything just comes together in the right place: that place was Tannadice Park, where the truly top-level talent were complimented by the wider squad in a way that simply leant itself to goals. The resultant top-four finish was a genuine team effort, even though not every member of the side has been destined to go on to greatness.

That is not to lump Ryan Gauld in with Çiftçi – the ability shown by the young winger was more than a man merely profiting from his circumstances. It is also easy to forget that he is still just 23. Dreams of the very top may have faded, but it is worth recalling that Armstrong did not make the move to the Premier League until he was 26. The Sporting man may yet reignite a career that has stalled and follow his former teammates on a circuitous route to the upper echelons of the game. Robertson reached Anfield via a successful spell with Hull City, and Armstrong had to prove himself with Celtic before a Premier League club would gamble on him, so it is far from being entirely out of the question. Despite a slow start at Hibernian it could well be that Scottish football holds the key to eventually recapturing his form. This is, however, besides the point in many ways.

For one glorious season, Gauld warranted his mini-Messi label while Armstrong and Robertson provided as strong a supporting cast as could be asked for. That Dundee United side is frozen in time, and the memory deserves to be preserved regardless of what each of them go on to accomplish. The image of the three of them turning out in orange shirts as outrageously bright as their attacking performances is an enduring one, and it should be treasured in Tannadice Park and beyond.

Mediocrity No Longer Enough for Fiorentina
Chelsea, Liverpool and the Practical Importance of club History
To Top