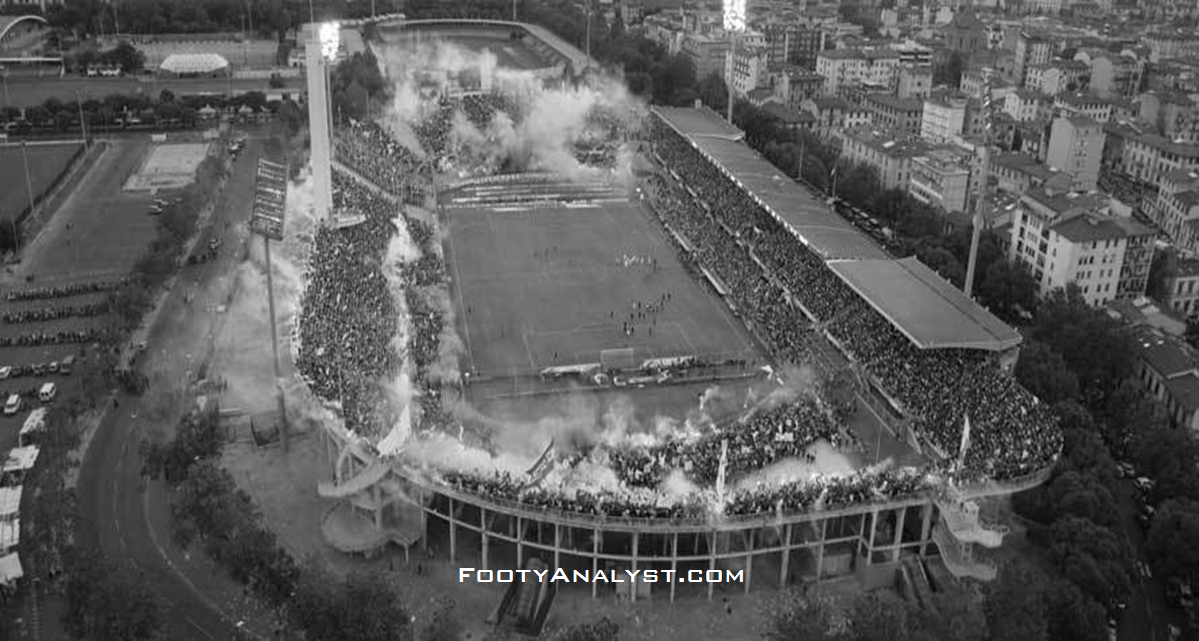 For nine years, Gabriel Omar Batistuta did his best to win for Florence, the city that he had come to consider his own and which in turn embraced him like an adoptive son. He stayed to score the goals that dragged the club out of the Serie B, tasted a modicum of joy upon lifting the Coppa Italia and, for one glorious season, led the charge as they came within touching distance of winning the Serie A.

Mostly, however, he had to endure the mediocrity of a team that could not finish above mid-table despite having one of the greatest strikers in the history of the game. Far too often he was surrounded by players who either weren’t good or determined enough. Eventually he was left with no option but to move to AS Roma where his goals were finally rewarded with a Scudetto.

“I love Florence and Fiorentina. I felt awful when I left,” he admitted years later. So much that when he scored the winner the first time the two teams met, he broke down into tears. “I knew how much the Viola fans wanted to get a result from this game and that my goal was going to disappoint them. That is why I shed tears. I wanted Roma to win, but I would have preferred if it had happened without me scoring.”

His goal may have disappointed them but few Fiorentina fans begrudged him the move. They respected all that he had done for them and accepted that the move wasn’t borne out of lack of loyalty but rather an acceptance that his ambition wasn’t going to be fulfilled if he stayed.

Much has happened in the nearly two decades since then. Soon after Batistuta left for Rome, there wasn’t even a Fiorentina with the club wiped out by debts that couldn’t be repaid. In their place a phoenix club called Florentia Viola was set up in the Serie C2 of Italian football and the once mighty Viola were forced to play in grounds that could barely hold a few hundreds. Eventually, this new incarnation won both the right to call itself Fiorentina and also its place among Italy’s elite.

The man who stepped forward when the old Fiorentina went under, putting in the money to breathe life into the new club, was Diego Della Valle. He is a largely self-made man having taken the small shoe-making family business and expanding it until it was one of the biggest shoe manufacturers in the world. Along with his brother Andrea, Fiorentina’s co-owner, he is amongst the richest men in Italy.

Fiorentina’s rise through the leagues seemed to re-energise the club. Not that there was any expectation of immediately challenging for the Scudetto but the momentum gave rise to hope that they might be on the right track. That hasn’t happened. There have been good years – where they came close to Champions League qualification – and bad ones that saw Fiorentina being pulled towards the wrong end of the table. In general, however, they have been rooted to mid-table. For the past two seasons, they have finished in eighth place; seventh is the target this year. And that is becoming a big problem.

Things seemed to be going well in the beginning. The new owners funded the club’s rise back to the Serie A and in subsequent years seemed intent on building a strong team, perhaps one strong enough to take some glory back to Florence. That, at least, was the hope among the support. The Della Valle family were fans with money so, surely, it seemed like they would do whatever it took.

As it turned out that wasn’t really the case. Perhaps aware of what had happened the last time that a Fiorentina owner had gone all out in a bid to win the league, they have tried to build a team by being better at spotting players rather than their ability to outspend their predecessors. Over the years they’ve done so admirably by offering a launch pad for the likes of Stevan Jovetić, Juan Cuadrado, Marcos Alonso, Matias Vecino and, briefly, Mohamed Salah. Their strategy has centred on recruiting young players from all across the world in the confidence and hope that some of them will prove to be worthy of the investment.

This is a sane enough strategy but it has one big problem: every player is for sale if the right offer comes in and this makes it very difficult to build a strong team. But it is also extremely frustrating for fans who do not want to hear about financial responsibility, especially when it means that they see the players who can deliver on their dreams departing. At first they accepted it possibly as they saw it as a temporary situation. Now, with this strategy showing no sign of changing it has come to symbolise the owners’ lack of ambition.

While there had long been murmurings of complaints, the move that really kick started the antagonism towards the Della Valle brothers was the one that saw Federico Bernardeschi join Juventus.

There has been a fierce enmity between fans of the two clubs ever since Juventus swooped in to buy a young Roberto Baggio back in 1990 and this has never showed signs of abating. That a player like Bernardeschi, who had come through the youth system, was allowed to leave at all was considered odious; that it was to a club so hated, unforgivable. From that point on, protests against the club’s ownership have been on the increase. The tragic death of club captain Davide Astori midway through last season temporarily halted the fans attacks, yet this only lasted for a few weeks.

There had been players loved by the fans who had been sold before – Jovetić and Cuadrado being prime examples – but at the time they were considered as necessary sacrifices to build a better squad. Yet when the money from those sales didn’t translate in investment in established players it left a sour taste. This is what made the sale of Bernardeschi particularly intense.

It builds into a growing narrative that when the Della Valle founded the club’s rebirth, it was done not out of love but rather as they sensed a business opportunity; to take over the club for a pittance, build it up relatively inexpensively and then sell it for a huge mark-up once it was relatively established back in the Serie A. That hasn’t happened and so they have resorted to selling players in order to make their money. At least that is how the hard core ultras view them.

At the end of last season the Della Valle brothers officially put the club up for sale albeit with the footnote that “only serious offers would be considered”. So far, none have come forward and the protests continue.

The current Fiorentina squad is filled with talented young players who promise big things: Alban Lafont, Nikola Milenkovic, Vitor Hugo, Christian Nørgaard and Giovanni Simeone. Yet, whilst there is talent in there, the squad lacks enough quality and experience to support their growth. The team lacks the backbone of established players to allow them to develop and, possibly, deliver some success along the way.

Twenty years ago, Fiorentina fans bade farewell to Batistuta, acknowledging his desire to move to a club that could meet his ambitions and recognising that he had dedicated the best years of his career to the Viola case. Today, there isn’t even that element of gratification. Bernardeschi was twenty three when he moved and the fear is that Federico Chiesa, the hugely talented twenty-one year old winger and another home grown star, will soon start pushing for a chance of glory elsewhere.

As the son of another former Fiorentina great, striker Enrico Chiesa, Federico has a closer attachment to the club than most. Yet even for him, as with the club’s fans, the apparent lack of ambition might be too much to take. If he were to choose to leave it would be the clearest sign yet that average is no longer good enough for Fiorentina. Whether anything changes, however, remains to be seen.

Liverpool and Borussia Dortmund: A Unique Relationship
Once Upon a Time in Dundee
To Top