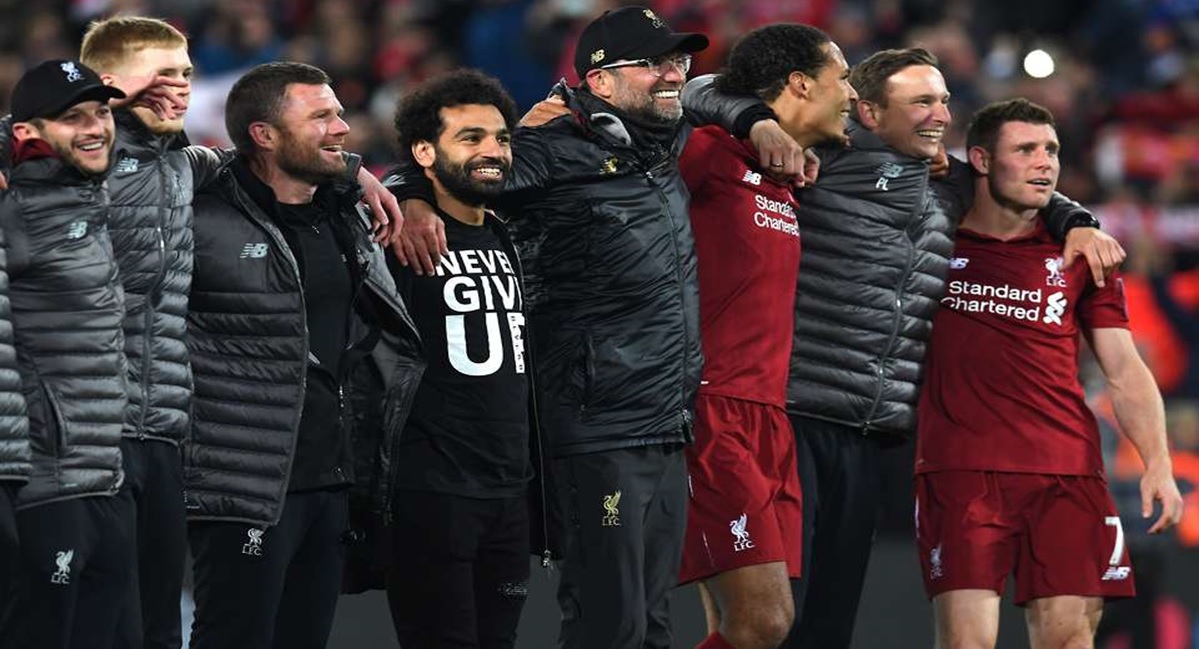 It is often assumed that a title fight brings with it only excitement for the fans of the clubs involved.  There is that, of course, but there is also the pressure and the numbing doubt that everything will turn sour. Those are the kind of sentiments that troubled many Liverpool fans for much of the past season. As the prospect of a title win began to solidify so too did the spectre of recent disappointments. Could this truly be the year or will it be another false hope? Everything – every result, performance and comment – was viewed from that lens, particularly at the turn of the year when results suddenly became hard to come by.

Ultimately it wasn’t meant to be; not because of any failing from Liverpool’s part – it is churlish to fault a team that managed to garner ninety seven points – but because they came across a side that is slightly better. The prospect of a Champions League final has kept morale high; this could still prove to be a successful season if success is judged only by silverware won. But there will always be an element of regret and frustration that such a great league campaign was not rewarded with the league title as it would have been any other year.

It is a situation benefits from a bit of perspective. When Jürgen Klopp took over as Liverpool manager in October of 2015 the club was, from a footballing point of view, on its knees. Luis Suarez and Raheem Sterling had both left after aggressively pushing for a move; transfers that had highlighted their lack of faith in the team’s ability to progress and gutted the team of two of its more talented individuals at the same time that the retirement of Steven Gerrard (via a stint in America) deprived it of its heart. And yet the real problem lay elsewhere.

An internal rift in the infamous transfer committee had resulted in a haphazard recruitment pattern. The club seemed to lack any proper plan on how to spend the money they generated from their high profile departures resulting in huge sums of money being wasted on players who clearly did not fit.

Christian Benteke, for instance, joined at the behest of Brendan Rodgers even though his particular skill set was at odds with the possession-based style that the manager had spent so much time talking about and trying to instil into the side. Lazar Marković, on the other hand, was a player seemingly picked by the club’s recruitment team judging by Rodgers’ apparent uncertainty on how best utilise him. The teams that were picked on a weekly basis, the results and performances made it extremely difficult to escape the feeling that the squad was divided between players that the manager had requested and others that had been imposed on him.

That is the situation that Klopp walked into. The team could be best described as a collection of decently talented individuals yet it was nowhere near good enough to challenge for a top four finish. A look at the squad that Klopp took with him for his first game against Tottenham is revealing: Mignolet, Clyne, Škrtel, Sakho, Moreno, Leiva, Can, Milner, Lallana, Allen, Coutinho, Ibe, Origi, Toure, Bogdan, Sinclair, Teixeira and Randall. Of those who are still at Liverpool, none can be considered a regular today.

The team Klopp found when he joined relied heavily on Coutinho, the one potentially world class talent in the squad. When he failed to deliver there was no one else on whom to depend on. Somehow Klopp managed to elevate that side to reach two cup finals only for the limitations in Liverpool’s abilities to be exposed on both occasions; and yet, within the space of three years that team was transformed into Champions League finalists and contenders for the Premier League title.

There have been a number of factors that have contributed to that. Klopp’s coaching has undoubtedly played a big role. Time and again he has shown a knack for improving players be it through his work with them on the training pitch, his tactical approach or instilling the unshakable belief in players regardless of their talents. Yet, for all his critics, Rodgers too was very capable of improving players. Rodgers was the one who set Raheem Sterling on the path to stardom, and to some extent played a part in transforming Suarez from a player who joined from Ajax to one that ended up moving to a prime destination.

Where Klopp has differed and excelled is in accepting the work carried out by Liverpool’s recruitment staff. There is no longer the debate over whether a player was bought by the manager or was imposed on him. Both parts work together and both have excelled.

Roberto Firmino, bought before Klopp’s arrival and marginalised by Rodgers, has become fundamental to the side. At Southampton Sadio Mane had already shown glimpses of his talent as had Salah in Italy, Gini Wijnaldum had been player of the year in Holland whilst Andy Robertson had impressed at Hull despite their relegation. Klopp has improved every single one of those players, moulding them to fit into his tactical vision.

There have been instances where he was not fully convinced about the players being signed – he has admitted that he wasn’t completely confident about Salah, for instance – but never has he let that uncertainty cloud his decisions on whether to use a player. His success at Dortmund also afforded him the luxury of time which he has used to avoid burning out players. Time and again he has shown patience with new players, letting them get used to the pace of the league and that of his team before fully integrating them.

The ultimate question – and the one that haunts Liverpool fans at every turn – is whether this will be enough. Only performance on the pitch can definitively answer that. In losing to Real Madrid last season, Liverpool failed to win the Champions League. Lack of silverware is an undoubtable verdict and one about which there was obvious disappointment but it entirely doesn’t make the season a failure, however, as Liverpool delivered so many great moments including the 0-5 victory at Porto or the storming successes against Manchester City and Roma. These moments have been an indication of how far Liverpool have come in the last few years.

The 3-1 thumping of Manchester United, the moments when the team pressed to rob opponents of possession, a cohesive squad singing ‘You’ll Never Walk Alone’ in unison, fewer goals conceded that the last 13 league champions, 97 points in the league are all forms of success. Before the return leg of this year’s Champions League semi-final against Barcelona, Klopp invited his team to do their best so that, at worst, they would “fail in the most beautiful way”. This underscores the manager’s philosophy that does not equate success only with trophy wins.

This has been a very good season for Liverpool despite missing out on the league. The beauty, excitement and fun that they have delivered along the way confirms it. Those who still need confirmation should simply cast a look back at where they were three years ago.

League One Relegation Battle: A Gargantuan race to stay up
Are Pogba and Ozil at fault or are they just media scapegoats?
To Top