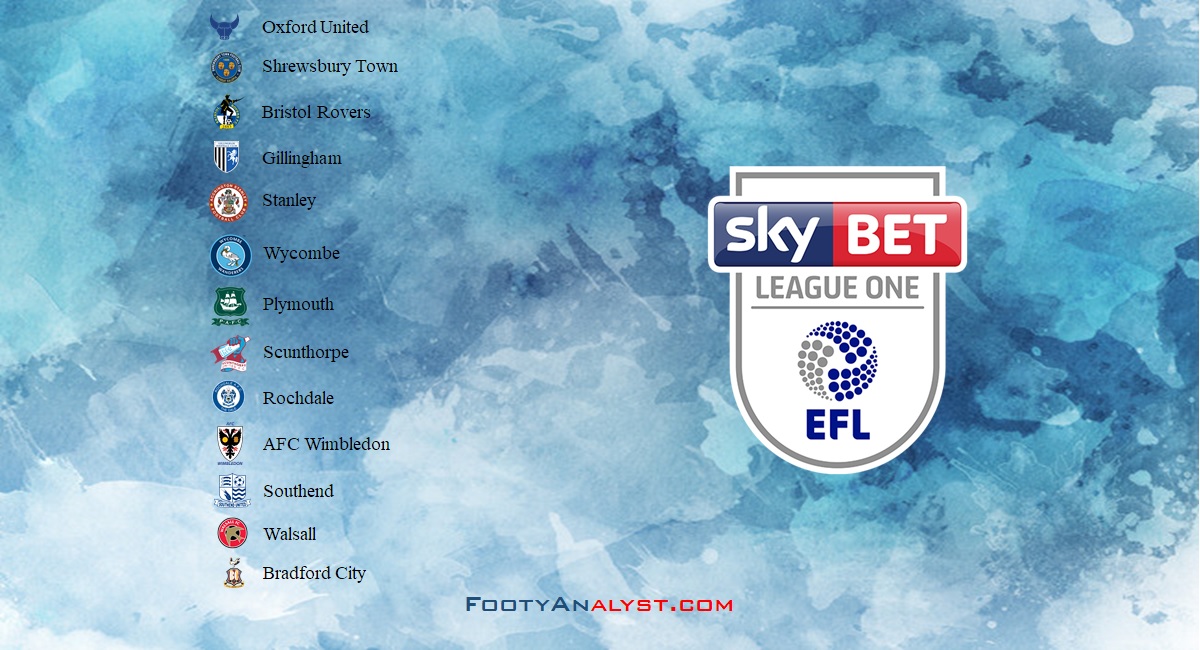 We are approaching the business end of the domestic season in England. In some leagues, the relegation picture is already settled – Huddersfield and Fulham have already been consigned to the drop in the Premier League, and Cardiff look highly likely to follow them. They may yet fight it out with Brighton, but realistically there are few other teams at risk of being sucked into a battle. It might be expected that the bottom three would be similarly settled in League One, where there are just four games left to play for most teams. Instead, almost half of the league is still mathematically in danger of the drop.

The number of threatened teams did stand at exactly 12 until very recently – Oxford United’s strong upturn in form combined with the fact that some of the teams below them must still play each other means that they have hauled themselves out of the scrap, but the eleven-strong battle royale is still quite enough to be going on with. Indeed, it is the array of remaining clashes between the sides in the bottom half that makes the run-in so intriguing.

The phrase “six-pointer” applies with such regularity as to almost lose meaning, and serves to ensure that everyone still has something to play for. Bradford City are six points adrift at the bottom in an otherwise improbably tight pack, but in theory even they are not entirely devoid of hope: they take on Gillingham, Scunthorpe and AFC Wimbledon in their final three matches, all of whom are on similarly uninspiring runs and none of whom are arithmetically out of reach of Bradford.

The Bantams will in all likelihood still face the drop, but their position is illustrative of the ludicrous amount of high-stakes games still to be played out in the final weeks of this League One campaign. Their combined record with Scunthorpe, who they visit on the penultimate weekend of the season, boasts just a single point in the last ten games. When two teams come into a match on such abject runs, the result is nigh-on impossible to predict, but the potential ramifications for a tightly-packed field are huge. Defeat for either side could hardly be called a shock, and yet if one team does lose then the other will pick up their first three points for at least a month – for Bradford this could be one last lifeline, for Scunthorpe a huge step towards survival.

Wycombe Wanderers provide another vivid example. The Chairboys started the season well and looked to be defying the pre-season predictions that they would be heading straight back down to the fourth tier. However, a twelve-game winless run then saw them mercilessly hauled into the fight, as narrow defeat after narrow defeat saw them tumble down the table. The freefall was halted abruptly with just one victory. Gareth Ainsworth’s men won at Southend at the weekend, sending their opponents deeper into the drop zone and giving themselves a precious three-point cushion to the bottom four. Given that the seven teams below them have won just 4 of their last 35 games, such a margin constitutes a reasonable degree of breathing space. Had it gone against them, it would be the now-precariously-poised Southend who could have begun to think about life in League One next season.

Also Read: Bosman Ruling, Brexit and the Impact on Football

As it is, Southend provide one of the most entertaining run-ins for the neutral to observe. The chance to take points off an immediate rival was missed against Wycombe, but further opportunities await against Walsall and Rochdale. These sides sit 23rd and 20th respectively, with Southend currently in the relegation zone in 22nd. The three of them are separated by just three points, so it is difficult to overstate the significance of any of these games finishing in anything other than a draw.

At the same time, even two wins could not guarantee safety for The Shrimpers. Unlike in normal relegation fights it is simply impossible to analyse all of the various permutations, as the sheer volume of potentially significant results means that all anybody can do is focus on themselves. This in itself is giving rise to an interesting and refreshing dynamic – a sort of stoicism has descended upon the terraces of many of the affected clubs, with fans simply willing their teams to pick up something, anything that might make a difference come the end of the campaign. There is a degree of disquiet in places, of course, but for the most part the frankly incredible battle is giving rise to something close to pure and unadulterated support.

Bradford City announced this week that their season ticket sales for next season have surpassed 13,000, a remarkable show of loyalty from a group who have every reason to feel disenchanted. The message is clear: this support is unconditional. Less tangible, but just as real, is the atmosphere at the grounds. Fred Kirby, a regular attendee at Wycombe’s Adams Park, remarked that in over 1000 minutes of not tasting victory, there was not a single boo directed at the team.

This does not go unnoticed by those on the field. Adebayo Akinfenwa, the hero of the victory over Southend, was one of many players to praise the “amazing” fans. At this level of the game in particular, the relationship between player and supporter feels close to symbiotic: anyone in doubt about the fine margins at play need only look again at the table, so any difference that the fans can make may truly be decisive.

One team that this will not be lost on is AFC Wimbledon. Their club owes its very existence to the fans, who famously rebuilt their side from nothing after the original Wimbledon morphed into MK Dons. The Milton Keynes club currently sit in the playoff places of League Two, while Wimbledon are in the first of the four relegation positions. The prospect of passing MK Dons on the way down is a singularly unappealing one, and the supporters will be hoping that the same spirit that got them from the Combined Counties League to the third tier in thirteen years can be conjured up to stave off the drop.

They are the only members of the current bottom four who can boast any kind of form, and there is an optimism that their trademark resilience will deliver them from relegation, but the stakes are high. This is their third successive season in League One. Construction on the long-awaited New Plough Lane, regarded as the club’s spiritual home, is set to begin within weeks. The “remarkable progress” of the side is what has made this possible, and while there is no indication that relegation would put it in immediate jeopardy, it is demonstrative of just how much is on the line for some of the teams in danger of going down.

Identity and even existence can be at stake. The last time Wycombe Wanderers were relegated from League One, they were forced to shut down their academy; this had produced the likes of Matt Phillips and Jordon Ibe in the past. For those raised on an exclusive diet of the Premier League, it is easy to overlook exactly how much is on the line.

This exacerbates the cruelty for those who do go down, particularly given that matches can turn on seemingly random and uncontrollable moments. At half-time in a recent game against Charlton Athletic, Plymouth Argyle’s Twitter admin mused that “you have to wonder how [Plymouth] are behind” – within five minutes of the restart, a calamitous own goal had doubled the deficit, which proved too great to overturn. Refereeing decisions can also turn a game on its head. It was Southend’s turn to show bemusement on social media when they took on Fleetwood earlier this month, bemoaning the failure to give a “blatant” foul early on. The same match saw a late penalty awarded to the home side, denying Southend a precious three points.

Erroneous calls are hardly a rarity either. Referees at this level of the game are not professional, and an increase in mistakes is almost inevitable. Every side scrapping for their lives could recount a terrible decision that has gone against them. Wycombe were denied two points against Blackpool in January after Akinfenwa was blatantly scythed down in the box but got nothing, and were left aggrieved again this month after an unlikely turnaround against Portsmouth was prevented when another clear spot kick was waved away in the dying minutes. Taken together, these could have meant safety – as it is, the run-in continues to be nervy with fans aware that survival is close to a necessity after a recent failed takeover left the financial situation precarious.

For the neutrals, though, all this only serves to increase the drama to fever pitch. That there will be more twists and turns in the last month of the season is guaranteed. Many football fans will be glued to the admittedly engrossing race for England’s biggest prize, but if they tune in to the bottom half of the third tier as well, then they will not be disappointed.

Federico Bernardeschi: Juventus’ Man of Substance
Progression Is Its Own Form of Success for Liverpool
To Top