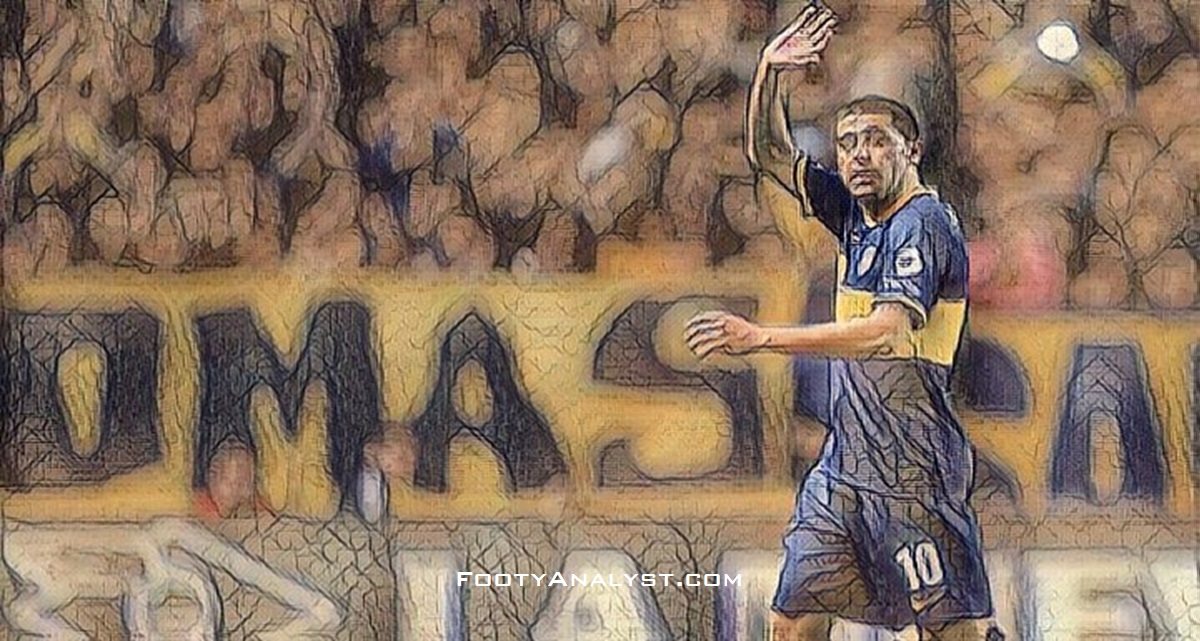 Argentina has always had a love affair with the number 10 shirt; Diego Maradona, Ariel Ortega, Riquelme and Lionel Messi are just a few of the players to have been entrusted with it over the years. However, the number 10 shirt has weighed heavily on all incumbents post-Maradona, Ortega never quite lived up to the pressure and the latest heir to the throne, Messi, may never fulfil his potential on the biggest stage.

Argentina, since the introduction of the game by the British in the late 1800s, has also always valued individual talent over the rigidity of the tactic and in a country which regards flair and style of paramount importance, the aforementioned players all had individual genius in abundance. The pressure of the shirt comes from their potential, their ability to do the unexpected. They are special players who compose a romantic ideal of a footballer and inspire us to love the game. The number 10 is often rebellious and strong-willed and Riquelme has always inspired discussion on the topic of the number 10, both good and bad.

Praised for his style and an almost hypersensitive ability to see the game unfold before him, seconds before everyone else, but like many players who are supremely gifted with the ball he was much maligned for his work rate and brooding, short temper. He played the game at a pedestrian pace, and teamwork and determination were never his friends when the opposition had the ball. ‘Box to box’ he certainly wasn’t, but Riquelme was much more than that. Admittedly, he practically stood still at times, waiting for the action to come his way again, when it did and he received the ball, the switch flicked and he transformed into a player of power, determination, energy, flair and precision.

Simply unplayable at times, the opposition was reduced to amateurish crowding out and rough tactics, but this didn’t work with Riquelme as he would simply play through, around and over them. Riquelme’s career seemed to be eerily intertwined with that of Maradona as Riquelme replaced him as a half time substitute during a game Boca were losing against fierce rivals, River Plate, in October 1997. It was Maradona’s last game for Boca and 19 year old, Riquelme, inspired a second half fight back in the much loved and almost mythical enganche role.

For all his mesmerising displays on the pitch, he was an aloof outcast off it; he disrupted dressing rooms and refused to train. His 56 caps for Argentina say much of his inconsistent performances for the national team, not to mention the in-fighting and political issues within the Argentinian Football Association, and his lack of success in Europe always seems to dilute his career in the eyes of many.

The son of an organised crime boss, Riquelme started and ended his career at Argentinos Juniors and was spotted by scouts of Boca Juniors. In November 1996 he made his Boca debut. The Boca team of the late 1990s and early 2000s containing Walter Samuel, Sebastián Battaglia and Martin Palermo was one of immense style and clinical ability. Riquelme, even though still in the early stages of his career, was at the epicenter. Under Carlos Bianchi, Boca went undefeated to the league title in 1998. Alongside Palermo and Marcelo Delgado, Riquelme lifted the 2000 Copa Libertadores and the Intercontinental Cup after defeating Real Madrid in Tokyo. Riquelme’s repertoire of passes, free kicks and assists earned him a huge reputation in Buenos Aires, and it wasn’t long before Europe came calling.

La Liga should’ve been Nirvana for a player of Riquelme’s quality. The technical style and measured pace should’ve suited his style of play, but it wasn’t to be. His transfer to Barcelona in July 2002 was often cited as a political move made by an interfering board of directors. First team coach, Louis van Gaal, rarely played him and openly stated he didn’t want to sign him. Van Gaal, like other strict coaches, have tried to manipulate work-averse players like Riquelme, he failed but as a punishment Riquelme often played on the left wing, away from the action. He was less imposing and was literally left to ride out his time in Barcelona, making just 30 appearances.

At a crossroads of biding his time in Catalonia or making a move elsewhere, Riquelme found a home in the most unusual of places. Villarreal, a modest provincial team in the embryonic stages of their La Liga life, took the forlorn Riquelme on loan in 2003. With a new found love and respect, Riquelme produced arguably the best football of his career. He teamed up with fellow pariah, Diego Forlan, to guide them to a third place finish in 2004/05.

Riquelme’s performances earned him a nomination for the FIFA World Player of the Year that season. His confidence soared and he became the player that everyone expected to be at Barça. Riquelme was instrumental in a 3-0 demolition of his former employers during the 2004/05 season, he assisted two and produced a dominating, teasing, and impudent performance as he split the Barça defence and ran rings around them in an effortless display bordering on genius.

Villarreal continued to defy the odds as they remained undefeated up to the Quarter Finals of 2005/06 UEFA Champions League, their maiden appearance in the competition. They helped dump Manchester United to the bottom of the group and although they lost the first leg away to Internazionale in the Quarter Final, they secured an away goal victory. However, the fairy tale was shattered for Riquelme and Villareal as his penalty miss ultimately cost them their Semi Final against Arsenal. Riquelme was so close to a rematch with Barça in the Final in Paris; the football Gods can be extremely cruel at times.

Riquelme’s magnificent form lead Argentina to the 2006 World Cup where they were rightly one of the favourites. He assisted Argentina’s second goal in their opening game victory over Ivory Coast and then turned in one of his finest displays, possibly his best in the famous striped shirt, as Argentina hammered Serbia and Montenegro, 6-0. Their path crossed with the hosts, Germany, in the Quarter Final, where they eventually succumbed to a penalty shootout defeat. Their downfall, many argue, can be traced back to Riquelme’s second half substitution. Germany never looked back after that point.

Villarreal’s form dipped under the weight of their Champions League displays and they finished 7th that season. For Riquelme, his time in La Liga drew to a close and he became further disengaged, the lengthy lead afforded to him by manager, Manuel Pellegrini, became too much for the squad to handle. The following season, he made just 13 La Liga appearances, scoring once. Tensions grew and tempers flared and by the end of his days in Spain, he simply refused to turn up to training. Eventually, Riquelme was loaned back to Boca in February 2007. Such was Villarreal’s eagerness to rid themselves of him, they paid his wage for the 2007/08 season. It says much about his influence in those final months in Spain and in particular on the Villarreal dressing room that they secured an unprecedented runner-up spot in La Liga the season after he left.

Riquelme was back home on a loan deal and he wasted no time in continuing his path to becoming a Boca legend as he helped them win five trophies during his seven-year second coming at La Bombonera, including the 2007 Copa Libertadores. The mercurial talent, in among the ticker tape and confetti strewn across the pitch, assisted Rodrigo Palacio’s opener and scored a rocket-like free kick from well outside the area as Boca demolished Gremio of Brazil, 3-0 at home in the first leg of the Final. The second leg brought more joy for Riquelme as he stunned the home crowd with a double to put the tie out of sight. The first goal owed much to his anticipation as he received the ball on the corner of the area and with his very next touch, hammered the ball home. His second and Boca’s fifth of the Final came just 12 minutes later as he tapped in to finish a fine counter attack. It’s no surprise that Riquelme won the tournament’s best player award as he secured Boca’s sixth Copa Libertadores title.

A protracted and unsuccessful transfer saga with Atletico Madrid in August 2007 left him unsettled the following season as he remained a Villarreal player after his Boca loan. In the end, a £12m deal was agreed in November for Riquelme to join Boca, but he only played ten league games that season. The Atletico row had barely resolved itself before a public spat with team mate, Julio César Cáceres, who accused Riquelme of not giving his all during games. Riquelme responded by declaring Cáceres had broken an unwritten rule by calling him out and issues such as this should be resolved behind closed doors.

Cáceres merely said what a lot were thinking and although Boca went on to win the Argentinian titles in 2008 and 2011, many thought Riquelme was simply too divisive and a luxury Boca couldn’t afford. After an aggregate defeat to Corinthians in the 2012 Copa Libertadores Final, he immediately announced his retirement, at 34 he proclaimed he was exhausted and couldn’t carry on playing any longer.

In and out of retirement

After a break of six months and reportedly being close to joining Palmeiras and Chivas USA, he was back at his spiritual home in Buenos Aires. Once again Riquelme, with a defence-splitting ball or a drop of the shoulder used the Copa Libertadores to show the genius side of his game for one last time. The 2013 Round of 16 game versus Corinthians provided the backdrop as he scored a simply wonderful goal. Level with the penalty area, almost on the touchline, he played a one-two from a quick free kick and curled a majestic shot over Cássio Ramos.

Also Read: Andrés Escobar: The Colombian Who Scored a Fatal Own Goal in 1994 World Cup

Riquelme had done it again and although they were eliminated by Messi’s former team, Newell’s Old Boys, in the Quarter Final, it seemed as though South America’s biggest domestic stage had gracefully knotted itself with Riquelme in a way which the FIFA World Cup seems to be synonymous with Pelé. During Riquelme’s Boca career he helped them to three Copa Libertadores titles and two Final appearances, but after one season he went back to where it all started as a teenager, Argentinos Juniors. That brief cameo lasted a few months and in January 2015 he announced his retirement, this time for good.

Riquelme failed to win any silverware during his time in Europe, again this is a black mark against him for many fans, but the lack of trophies one collects just shouldn’t diminish ones influence on the game. European, and in particular English, football snobs argue that he should’ve achieved more, made another move to a big club or been more imposing on the international stage, but Riquelme was a law unto himself. His languid style was completely at odds with his superior football brain; a player of enchanting natural ability and refined shooting prowess. Riquelme may have divided opinion as fans, coaches and teammates either loved him or loathed him, but it cannot be denied that the game would have been duller without him.

All thud and blunder in 2009’s very British Champions League encounter
The Battle of Santiago 1962: The dirtiest game in World Cup history and English Referee Ken Aston
To Top