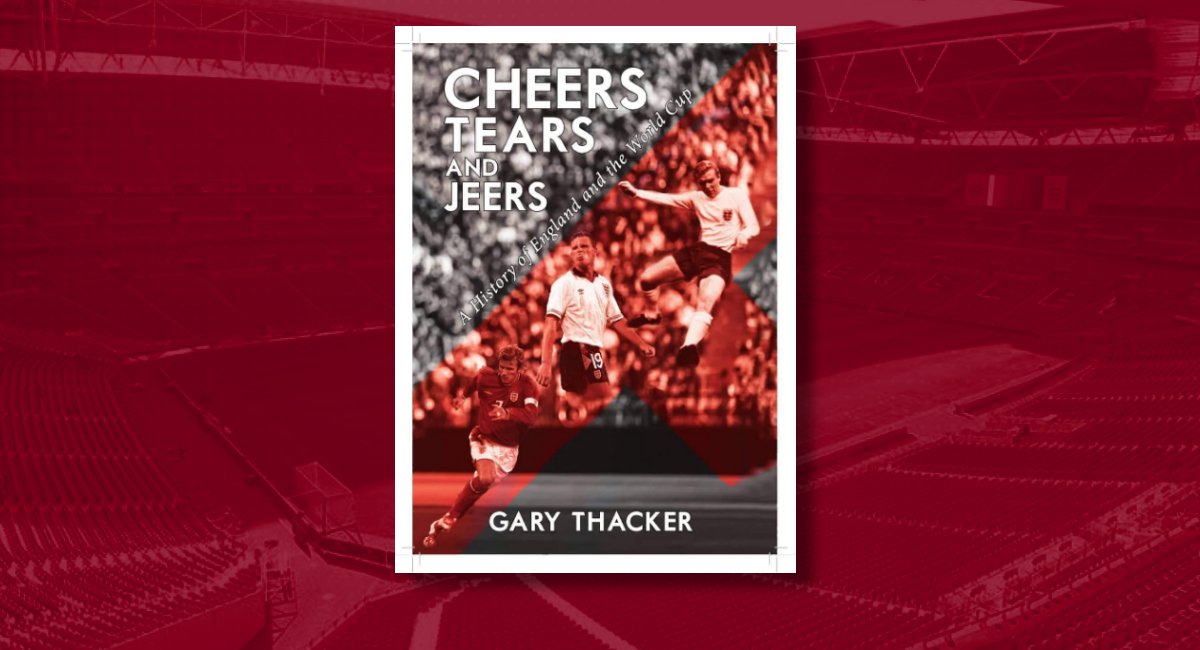 It takes a brave and perhaps ever-so-slightly masochistic person to take on a history of England and the World Cup. Gary Thacker is that man.

His book, Cheers, Tears and Jeers, provides a comprehensive account of England’s showing at every World Cup, scattering in the European Championships for good measure. It cannot be faulted for thoroughness: it unflinchingly details every tournament, mapping the often-hopeful qualifying process before delivering the hammer blow of disappointment that follows almost without exception.

Of course, the one major anomaly is 1966. Thacker uses this as his opening to the book – even as someone who tends to favour club football, it is impossible not to be caught up in the emotion evoked in Chapter One as a day-by-day countdown leads up to the greatest moment in the history of the national team.

The choice of this structure, shaping everything around what the book consistently refers to as ‘The Day’, is a bold one. At least a straight chronological structure would have provided a brief respite from England’s mediocrity. Instead, following the beautifully described highs of the first chapter, we jump back sixteen years to the national team’s first involvement in a World Cup in 1950. From then on in, more than sixty years of football are described across over 220,000 words with not a single trophy in in sight.

There is an inevitable risk of anti-climax, although in fairness it is England rather than the author that must shoulder most of the blame for this. Smatterings of sections on the fates of other nations, for example Brazil’s 1950 humiliation at the Maracanã, generally keep things ticking over. By slightly widening the brief beyond England, while still retaining them as the focal point, the book avoids becoming irredeemably bleak.

Moments of vivid description and embellishment also compel the reader onwards, even when the England performances being recounted might otherwise prompt them to hurl the book across the room. The picture Thacker paints of the Estadio Azteca is particularly powerful:

“Being the first venue to host two World Cup finals, it’s fair to say that the old stadium has witnessed a fair bit of the beautiful game with some of the rarest talents ever to grace the international arena treading its turf. When the Azteca speaks of greatness, therefore, it’s done with the authority of age and experience. It therefore behoves us all to listen.”

Even with such capacity to conjure up images, however, it must be said that the book does have a tendency to drag in places. The sheer level of detail is admirable, but ultimately it does leave a feeling that some of it could have been cut – at times it feels as though you are simply wading through historic match reports. Perhaps the qualifiers in particular could have been dealt with in a more summary fashion: time is understandably dedicated to them in the disastrous years where England fell short of reaching the tournament proper, but the same level of detail feels unnecessary when serving as a mere presage to the main event of the chapter.

Nevertheless, each chapter contains something of interest, even if on occasion it is buried quite deep. In particular, the references to contemporary commentaries often provide fascinating insight; the highlight probably comes with the inclusion of German commentary from the infamous ‘non-aggression pact’ game with Austria in 1982. The line – “What’s happening here is disgraceful and has nothing to do with football” – provides a unique perspective on how German fans viewed the incident, and it is typical of Thacker’s meticulousness to have tracked it down.

The research and writing of the book took close to three years, and in general this absolutely shines through. Certainly, almost every relevant secondary source available has been utilised – the book also contains possibly the greatest footnote reference of all time, in the shape of “MacColl, Kirsty (2000), ‘England 2 Colombia 0’”. Very occasionally, it leaves the reader wishing more primary research had been possible, as when an aside about England changing socks at half-time is left unexplained, but such information is bound to be hard to chase down some fifty years after the fact.

The opinions of the author are deployed well, generally taking a back seat but occasionally coming to the fore to comment on a matter of particular contention. Often, these personal views are included to add balance to an area where received wisdom is wholly one-sided: the Graham Taylor years, for example, are described in a way that evokes empathy while also highlighting the shortcomings. The fine margins involved in the game are repeatedly acknowledged: reliving the ill-fated Netherlands qualifier, Thacker muses that ‘a few inches could have made all the difference’.

Any Chelsea bias is kept admirably at bay for the most part, although the brief treatment of the Gerrard/Lampard debate did not go down well with this Liverpool fan! I won’t be drawn here into yet another re-run of the schoolyard squabble of my generation, but perhaps the book would have been better off sidestepping it too – certainly it is an argument that deserves more than perfunctory presentation of some select statistics. In fairness, it may well be that this is a debate to which I have simply become far too sensitive, but the short space devoted to it seemed to me to fit uncomfortably with everything else.

This is still a remarkable feat of a book. The sheer scope of the brief is daunting – it was no small achievement to even find the courage to set out on such a task. The amount of reports read and footage watched does not bear thinking about, and the thoroughness ultimately pays off: while it is not perfect, Cheers, Tears and Jeers can certainly claim to be an authority on England and the World Cup.

*You can buy ‘Cheers, Tears and Jeers: A History of England and the World Cup’ by clicking here.